“Over the summer, there have been a lot of delays in construction and development on the campus, but we are still doing a lot of designing and planning for the future,” Liam Cutri-French, Rowan’s assistant vice president of facilities and operations, said at the Sep. 14 Student Government Association (SGA) senate meeting.

The delays Cutri-French mentions are the demolition of the Triad Apartments and North Dorm Halls, part of Rowan’s multi-million dollar plan to replace outdated housing for modern dorms.

According to Rowan’s Vice President for University Relations Joe Cardona, the school has thus far invested $125 million in active projects and $97 million in projects still in the design phase.

Rowan repurposed the vacant Triad Apartments to accommodate students infected with the novel coronavirus, delaying its planned demolition for at least another semester. According to the construction plan, the future freshman dorm will replace the North Dorm Halls including Chestnut, Magnolia and Willow Halls, while the sophomore dorm will be in the same location as the current Triad Apartments.

“We needed the [Triad Apartments], that’s where we put [students testing positive for COVID-19] for isolation. It turned out perfect because we weren’t going to use it anyway,” Cardona said.

Cardona also said that Rowan ultimately decided to delay the North Dorm Halls’ demolition as a precaution considering the uncertainty of this school year due to coronavirus.

“Chestnut would have been the first one [demolished]. Once the new building opened up, Willow and Magnolia would come down and not be replaced,” he said.

There is no official date regarding the completion of the new housing. The only date ever mentioned regarding its completion came from the former Alternate Student Trustee for Rowan Kyle Perez at an SGA Senate meeting on Jan. 27, 2020.

Perez stated that the new freshman housing could finish construction closer to 2021, while sophomore accommodation could end around 2022.

The completion dates Perez mentioned were never certain; Perez shared them with the school senate before Rowan’s Board of Trustees had to deal with COVID-19.

When students evacuated campus back in March, the Discovery Hall’s construction site was just a frame of steel beams and platforms. The progress seen now is evidence of Rowan’s commitment to following through with the $46.7 million project.

“We didn’t really lose any time on the major construction dates. Early on, when COVID hit, there were some rules set aside for educational institutions to enable them to continue construction,” Cardona said.

The state government has been instrumental in Rowan’s growth, continuing its support by permitting schools to continue construction.

“When we were doing higher education reconstruction in 2013, we gave Rowan University resource designation, which they didn’t have, and we gave them another medical school,” NJ State Senate President Steve Sweeny said at the ceremonial press conference for the Discovery Hall on Feb. 3, 2020.

According to Cardona, Discovery Hall’s construction should finish by the end of next spring. Rowan is permitted by law to continue with its building projects, so Cardona doesn’t expect significant delays ahead. 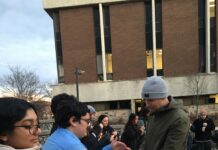