The Delaware Blue Coats extended their winning streak to a season-high four games on Monday, Jan. 16 by beating the Wisconsin Herd 153-132 at Chase Fieldhouse. The 153 points were just three shy of a franchise record.

Mac McClung led all scorers with a game-high 40 points and seven three-pointers. In addition, Louis King scored 23 points including five three-pointers, and Michael Foster Jr. scored 17 to go along with ten rebounds.

It was evident from the opening tip that the Blue Coats were feeling confident coming off two straight road wins against the previously undefeated Maine Celtics. The Coats led by as many as 15 in the first quarter and scored 38 points total.

After the game, King talked about the team’s confidence level heading into this one.

“Once we catch our rhythm, once we catch our spark and everyone’s together, it just comes down to what we can do together on the court,” King said. “We’re just out there playing.”

A large part of the Coats’ first-quarter success came from transition offense. Those opportunities stemmed from the defense getting timely stops, with the team showcasing an all-around dominant effort to kickstart the game.

McClung was a main beneficiary of the Coats’ hot start, scoring a team-leading eight points in the first quarter. The former G-League Rookie of the Year spoke highly about the pace that Delaware was playing at in the early stages.

“That’s how we’re looking to play, fast,” McClung said. “Pushing the ball up with the pass, and it felt good. Everyone was playing together, and we had fun.”

The Herd posed a unique challenge to teams with their height and length. Throughout the game, Wisconsin put multiple 6’10”+ bodies out on the floor, which is more than what the Blue Coats have to offer in terms of their height. King mentioned how the Coats’ were able to deal with the Herd’s size on both ends of the floor.

“We just made shots,” King said. “Every game we go into, we try and harp that we need to make shots in order to stay in the game and win. For us, we do have small guards, but once we come together during the game and we start making shots, getting steals, getting out in transition and getting easy layups, it’s all easy for us.”

Delaware was able to put up two sizable leads at times Monday, with the Coats leading by as many as 18 points through three quarters. However, Wisconsin never let them gain full control.

Mac McClung changed that in the fourth.

A flip switched for McClung in the fourth, with the recently named NBA dunk contest participant dropping 20 points and raining in five threes in the final frame to slam the door on the Herd. The standout quarter capped what’s been a nice run for McClung lately, with the rising star averaging 25.8 points in his last four games. 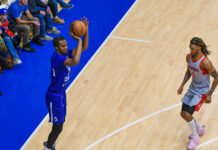