In their quest for the New Jersey Athletic Conference (NJAC) title last year, Rowan men’s basketball came up short, falling to Stockton University in the championship game, 95-91. In the NCAA Tournament, the Profs saw a first-round exit after a loss to Susquehanna University. With a new season well underway, Rowan has added a new star to help bring them back to the championship, this time hopefully for a win.

When Ja’Zere Noel joined the Profs’ roster, he had come a long way since graduating from Woodbury High School in 2017.

During his time with the Thundering Herd, he was a three-time All-South Jersey selection, a three-time All-Conference First Team selection, named the South Jersey Player of The Year, and made All-State Third Team, he even helped lead his school to the state championship in his senior year. His trophy case can be filled up just with high school accolades alone, except his success continued.

Noel started his collegiate basketball career at Rowan College of South Jersey, where he immediately shined. Noel averaged 21.9 points per contest, which led the team for scoring, and 9.8 rebounds per game in 30 games as a freshman.

After his stint with the Roadrunners, Noel wanted to up his competition level, moving to Division II basketball as he transferred to Jefferson University. Playing under legendary coach Herb Magee and the Jefferson Rams, Noel served an important role off the bench most of the season. He played in 29 games, starting two, and averaged 5.7 points per game in 13.6 minutes a game.

Jefferson was scheduled to play in the NCAA tournament that season before it was canceled due to COVID, just the first season that would be affected by the pandemic.

After his lone year at Jefferson, Noel decided to transfer to Lincoln University. The 2020 to 2021 season at Lincoln was cut short due to COVID after it was decided that they could not play during the pandemic.

After a brief time at Lincoln, Noel decided it was time to transfer to Rowan.

“Rowan was always in the mix for me,” Noel said. “I’m a strong family-oriented guy, I love my family, I love being close to family. Even being away from my family, I’m not too comfortable with that.”

Noel thought about how others might view transferring from a Division II school in Lincoln to Rowan, a Division III school. Eventually, Noel realized it wasn’t about people’s opinions.

One group of people who aren’t questioning his decision are his new teammates at Rowan. They are happy to have a player as talented as Noel who’s had experience playing under different coaches and playing in a Division II championship. Current Rowan guard, Marcellus Ross, feels Noel is a great addition to a team that is already a championship contender and can attest to the type of player he is.

“I feel like adding Ja’Zere Noel to our locker room has been a positive thing,” Ross said. “Ja’Zere is one of the most genuine, unselfish people that I’ve ever met.”

Ross also stated that even though this team is already as competitive as they come, Noel puts them in an even better position to win a championship.

“Coach [Head Coach Joe Crispin] says all the time this year that we’ve added another player who is one of the best players in the conference to our team,” Ross said. “So now we’re definitely able to get that championship this year.”

With that level of support from his teammates, it’s understandable why Noel has easily adapted to being a leader and star of this team. This not only comes from his talent, but the mentorship he’s had, starting with Coach Herb Magee.

Now he’s under the tutelage of Coach Crispin, who couldn’t be any happier with his newest star.

Noel is joining a team that is extremely talented. Frequently, someone from the Profs is named NJAC Player of the Week. Teammates like Marcellus Ross, Connor Dickerson and Andrew Seager are only some players that have won the award. Noel was given this honor in the second week of the season.

Noel has come a long way since Woodbury High School and is hoping to become even more of a star for one of the best teams in the conference. 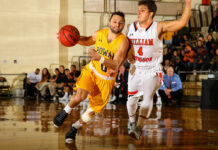 From playing for Rowan Men’s Basketball to coaching at Villanova: The Rob DePersia story