Philadelphia native and graduate student Danielle McCurdy has been a valuable addition to the Rowan women’s basketball team. She was sought after since her high school days by Head Coach Demetrius Poles, though she wasn’t always a part of Coach Poles’ team.

“I recruited her in high school, I guess we came in second behind Scranton [University],” Coach Poles said jokingly. “I went to her high school almost every night… I was the assistant coach when I recruited her, but when I took over we still kept in touch, and she reached out because she knew how much I liked her as a player and as a person.”

Although McCurdy spent four years playing at Scranton University, after the 2021-22 season she had an extra year of eligibility. She knew that Poles’ coaching style and the success of Rowan would be a perfect fit for her.

“After I did go away [to college] coming back home and being able to be close, and play for someone who I had already met and worked through the recruiting process with, I trusted him [Coach Poles] and his style of play,” McCurdy said. “I obviously saw that he took over and crushed it his first year here, so I was looking forward to the chance to play for him, and I knew he thought super highly of me as a player so that was really exciting for me to come play for someone like that.”

McCurdy has stated that she enjoyed her time at Scranton, but here at Rowan, she has more flexibility in her game and is able to contribute in a multitude of ways for the Profs.

“Here I have a little more freedom, actually here is a lot more freedom. I was kind of put into — I don’t want to say it — a box, because I did have a great experience there,” McCurdy said. “But I had a certain role and that was kind of all I was able to do. Here I’ve been able to expand it in all sorts of ways I’ve never done before, I really hadn’t shot the ball much there at all, which was fine I was happy to distribute, but it’s been really cool to take shots and do things I’ve never done before in a game.”

During her time with the Royals, McCurdy adapted to her more defensive and facilitative role, as she is tied for eighth all-time in program history in blocks per game (1.1) and tenth all-time in blocks with a career mark of 95.

Though she is equally as defensively sound and unselfish at Rowan, Coach Poles has encouraged her to expand her game and get more involved on the offensive side.

“Player wise and attitude wise she’s great, she can run the floor all day, great defensive player, very bouncy. She can defend the paint, she can defend the perimeter and her energy is contagious,” Coach Poles said. “She’s opened up her offensive game, at Scranton she wasn’t really allowed to shoot much, I’m letting her shoot, I’m letting her be a complete basketball player and I think she really loves that. So I think that really helps out everybody.”

In addition to 6’1″ McCurdy, there are other post players on the Profs that play pivotal roles to the team’s success. Ayanna Johnson, Eliana Santana and Dakota Adams share time as forwards for the team along with McCurdy.

“I’m just impressed by the talent of the forwards in this program, like Eliana [Santana] is just amazing on and off the court, I haven’t played with someone like her ever,” McCurdy said. “The more they figured me out, the more I was able to figure them out. I’m used to playing with two bigs in and they kind of play the four out one in so we can play off of each other a little bit more with my style added into their style already.”

McCurdy has made 16 starts out of the 19 games so far this season, where she is averaging 4.6 PPG, shooting 37.3% from the floor, 5.1 rebounds and has amassed 45 blocks, which leads the New Jersey Athletic Conference (NJAC).

While she was at Scranton the team made it to the NCAA Division III Women’s Basketball Semifinals, where she played quality minutes and in addition she saw multiple trips to the NCAA tournament. Her experience will only help the Profs, a team she feels like she’s supposed to be with.

“I’d like to say I’m a pretty good fit mostly just because I have so much experience and I can see the younger girls’ potential,” McCurdy said. “They don’t know it yet but what they’re capable of, this program has a lot to look forward to. So for me being a more experienced player, I can show them ‘if you do this you can be successful’ because I know it, I’ve seen it, I’ve done it.”

Coach Poles understands the importance of McCurdy’s experience, and playing at an elite level during the regular season can transition into postseason play.

“She’s a winner, she played at Scranton, went to maybe four NCAA tournaments, won six NCAA games and went to the Final Four,” Coach Poles said. “So she’s a winner, I like winners, I’ve been a winner my whole life and I like to play with people who know what it takes.”

McCurdy is hoping to help the Profs get back to the tournament for the first time since the 2019-2020 season. Before the NCAA tournament, the Profs are looking to make a push for the top spot in the NJAC with McCurdy contributing on both ends of the floor. 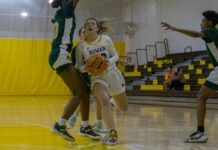 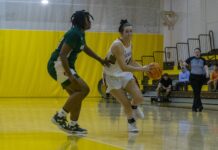 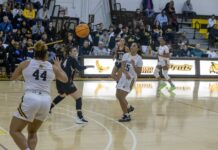