Every Saturday, the Ric and Jean Edelman Planetarium will host the Laser Daft Punk show at 7 p.m. The Laser Daft Punk show is a tribute to the French electronic music duo of the same name. The track list for the show features the songs “Around the World,” “Da Funk,” “Digital Love,” “Aerodynamic,” “Derezzed,” “Harder, Better, Faster, Stronger,” “Short Circuit,” “Television Rules the Nation,” “One More Time” and “Technologic.” The songs are accompanied by stunning visuals that seek to amaze audiences.

“I really liked the butterfly animation. I thought that was awesome,” McTigue said.

There are appearances from lively and bright creatures that consist of aliens, penguins, robots and frogs during “One More Time.” This was a favorite for Nicki Petaccio, a psychology major.

“I like when the frog came in. I thought he was really cool.” Petaccio said.

The show also takes you into the realm of Tron as you watch the French duo ride Lightcycles around the Grid.

“[My favorite…] I would have to say the Tron featuring, how they brought in all the songs from Tron and everything and then all the light bikes and stuff. It was sick,” said psychology major Patrick Corrigan.

During the song “Harder, Better, Faster, Stronger” hands can be seen, with each part of the hand showing the words of the song. The duo’s iconic helmets make an appearance as they float around the dome while “Television Rules the Nation” plays.

You don’t have to be a Daft Punk fan to come watch and listen. Several attendees came into the laser show with no prior knowledge of the group, but left impressed.

“I was not [a fan] before this, but I really enjoyed it,” Farnia said.

Tickets for the Laser Daft Punk show are $3 for students and $5 for non-students and can be purchased at the door 30 minutes before the start of the show or through the online marketplace.

The show contains loud music and bright flashing lights, so it is not recommended for those who are sensitive to either.

The Laser Daft Punk show is a tribute, as on Feb. 22, 2021, the French duo posted a video on their Youtube channel titled “Epilogue.” In the video, the duo announced their separation after 28 years of being together.

Daft Punk was formed by Thomas Bangalter and Guy-Manuel de Homem-Christo in 1993 in Paris. The duo makes house music that combines elements of funk, disco, rock and pop, and they have produced some of the most iconic songs within the past decade. Daft Punk has been nominated for the Grammys 13 times, winning seven times.

“All my brothers listened to it and then they got me into it. So like, listening to it, it almost just brings me childhood memories of like listening to it with my family and like all my older brothers and stuff, ” Corrigan said.

The show is part of the Winter Schedule that runs weekly from Jan. 6 to April 2. If Daft Punk is not to your taste, the Edelman Planetarium offers several different programs. “Laser Doors,” a laser show with music from the ‘60s rock band The Doors, is held Fridays at 7 p.m. On Saturdays at 5:30 p.m, Edelman Planetarium will be showing “Supervolcanoes,” an immersive show which looks at rare past eruptions, narrated by Benedict Cumberbatch. 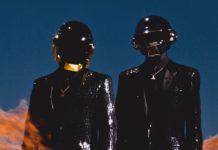