Politics. This ugly, eight-letter word is often a feared dinner-time conversation. It’s the source of arguments and polarization. It’s often thought of as an old, white man’s game, but it doesn’t have to be like this. Politics, at its core, is meant to bring people together in hopes of a more unified and connected community. Laws, orders and resolutions are all meant to create a society we all want to live in. And because of this, politicians hold an immense amount of power. Despite its current abrasive nature — and whether you can realize it or not — politics affects almost every aspect of your life.

Ever notice how loud events such as Hollybash or Glassboro’s Christmas tree lighting almost always “end” at 9 p.m.? That’s likely because Glassboro’s government passed noise ordinances that limit the use of sound amplification equipment that is “plainly audible at a distance of 50 feet in any direction from the operator” between the hours of  8 a.m. to 10 p.m.

Almost everyone is familiar with the terms alimony and child support, but have you ever wondered how they calculate how much someone is owed? Surely it’s not just an arbitrary number. In fact, state governments are in charge of passing statutes to regulate how long and how much these payments will be made for.

At the top, we have senators, representatives, a president and a vice president that, in total, amount to 542 federal offices. Their job is to make laws that govern the whole of America. Some recent and upcoming decisions include the “Respect for Marriage Act,”  the “Medical Marijuana and Cannabidiol Research Expansion Act” and the “Ending Importation of Russian Oil Act.”

If these politicians hold such influence over our lives, why shouldn’t we be a part of that system? Our government is meant to be a reflection of the people they govern. Yet despite the median age of American citizens being 35.3, the average age of the House of Representatives is 58.4 and the average age of the Senate is 64.3. With a life expectancy of 77.3 in America, the people who are making these laws are likely to not even be around to reap the benefits or consequences of these decisions.

It has long been the belief that politics is for retirees and aristocrats but that is not the case anymore. This year, Floridian Maxwell Alejandro Frost became the first member of Gen. Z to be elected a member of Congress, at just 25 years old. This marks a distinct change in the landscape of federal politics. It shows that young people are not only attempting to get involved but that voters are willing to vote for them.

Holding political office isn’t only beneficial for the people in your community but also for the politician themselves.

I ran for election in my hometown in the midst of the pandemic, and I can tell you it’s not easy. It’s a lot of talking to the community, waiting for results and creating election materials such as signs, flyers and social media posts. It’s also been one of the most rewarding and humbling experiences I’ve ever had outside of college. It taught me design, informed me about the problems occurring in my town and opened my eyes to the dirty side of politics.

Election night was filled with worries and mail-in ballots meant the numbers went back and forth between myself and my opponent. At the end of three very long days, I was honestly stunned to see that I had won. On Jan. 4, 2021, I was sworn in as Councilwoman for Ward 4 of Monroe Township.

I won’t lie, since being sworn in I’ve had to deal with a lot of people looking down on me because I am young and female. I’ve been called “naive,” “incompetent” and more. It hasn’t all been easy, but each obstacle has taught me valuable skills that I have been able to transfer into almost every other area of my life.

Entering politics at a young age is necessary to create the kind of world you want to live in. Stop letting people on their deathbed make decisions that will impact the rest of your life and the life of future generations. Get involved to not only make your community better but to give yourself an opportunity to learn and develop life skills. It’s not always easy, but I feel it’s one of the most important experiences a young person can have. 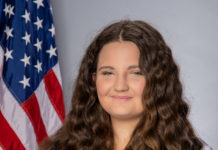