Rowan’s Division of Diversity, Equity and Inclusion (DEI) held a discussion panel on the Maternal Mortality Crisis. The panel discussed the Hulu documentary, “Aftershock.” The documentary reveals that women of color are failed by the maternal health system in the United States — and at higher rates than white women.

The panel included physicians, nurse practitioners, patients and community advocates and had close to 100 people on the virtual call.

Clara Clements, Ph.D., talked about how implicit bias and structural racism impede equitable access to health care. Clements told a story about working as a nurse practitioner at the University of Penn and going into premature labor while on the clock.

“[I] spoke to my provider and said that I did not feel well. He said ‘Oh, it’s just the stress of being a black woman and working a whole 12-hour shift.’ I ended up delivering a one pound, 14-ounce little girl who was 25 weeks and six days,” said Clements. “Thank goodness that she is now 24 herself, however, I was living that example of it did not matter what kind of access that I had.”

What if her less-than-two-pound baby didn’t survive? Unfortunately, that is the story of many women.

Bentley Edwards, Ph.D, shared a moving story that left many women wiping their eyes and the call went silent for a few moments after. Edwards had difficult pregnancies involving preeclampsia paired with doctors who blew off her medical concerns.

Edwards also talked about trends that she sees and stated that pregnant black women often have to advocate for themselves in a doctor’s care because they know something isn’t right and their advocacy for themselves is misconstrued as aggression.

“I think it’s a bigger problem than just access, right? So, it’s not just getting access to care but how you’re treated every step of the way from the making an appointment to the front desk person to giving birth and afterwards,” said Dana Iglesia, Ph.D.

Iglesia used herself as an example to explain that a white woman without a high school degree has better maternal outcomes than she — even with a degree, a high-income job and health care.

Iglesias shared a powerful, yet startling story while working in labor and delivery.

“It was the first time in my career that I had a patient look at me… This was the first time in my career I had a black woman look at me and said, ‘I am scared. I am afraid.’ We made super deep eye contact and I said ‘I understand what you mean by being afraid. If you’re following anything that’s happening, you know that your life is more at risk than others. And I’m here to tell you I am going to do everything I can in my power as a black woman to care for you.,’” Iglesias said. “I commend this woman for having the courage to speak up.”

The panel also touched on COVID-19 and the way it complicated pregnancy for black and Latina women. When only one person was permitted in the room during birth, women had to choose between having their partner with them or their doula. They had to choose between medical support or emotional support in an environment where both should be readily available to women in labor. This one-person rule affected everyone, but it was another frustration that women of color added to their list.

More than anything else, the panel provided a platform for awareness. Throughout the two-hour discussion, advocacy was mentioned often. With the knowledge and experience these women have, they are actively helping women of color as they navigate through an unjust medical system. 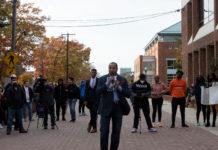 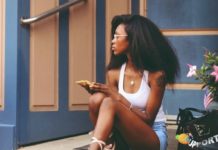