Rowan women’s swim team won their first away meet of the season against Stevens Institute of Technology on Friday, Nov. 11, by a final score of 120-84. The Profs were 2-4 against Stevens all time and came in 1-2 on the season with Stevens standing at 0-1.

Last week, Head Coach Elise Fisher said this meet would be a little different compared to the prior ones.

A lot of freshmen were able to have strong showings, including Molly Klinedinst, who won her first collegiate race in the 1650-yard freestyle at 18:45.77.

“It was nice to do one of my favorite races and come out winning,” Klinedinst said.

Another freshman, Trisha Lau, clocked in a time of 1:02.25 seconds in the 100-yard backstroke, where she finished 0.10 seconds behind Steven’s, Natalia Brunetti.

“I was just focused on keeping my head back and my rate up. I had no awareness of where everyone else was,” Lau said. “It is pretty cool to look up and be like ‘oh it’s a season-best.’”

“The 500-yard freestyle is mentally more challenging than it is physically,” McChesney said. “I do a lot of quick bursts so I have to learn how to conserve my energy.”

Ella Pennington and Emma Padros were once again in the victory column. Pennington won the 100-yard butterfly at 59.42 and placed second in the 200-free. Padros claimed the top spot in the 400-yard individual medley with a time of 4:47.01.

“My strategy going in was to make sure that I went out strong and I kept my pace going,” Jones said. “I also had Laura [Jones] racing with me as well, which is really motivating, so I’m not surprised that we were both able to do really well in the event.”

The “Joneses” teamed up with McChesney and Pennington in the 400-yard freestyle relay, winning the relay with a time of 3:42.42 seconds.

Senior Lindsay Cave swam a time of 26.54 seconds for third in the 50-yard freestyle; she touched the wall 0.50 seconds after teammate Laura Jones. (26.04)

“It’s not an event that I normally swim in,” Cave said. “So I was pretty happy to go out there and see what I can do. I was content with it.”

Overall, from a team standpoint, Coach Fisher was happy with her team’s effort Friday.

“I think they did awesome. They knew they had an opportunity to swim other events they don’t normally focus on,” Coach Fisher said. “So there’s a little less pressure associated with it, but I think they also wanted to make a point in what they were doing. I think they had a really fun time and they got up for one another which was awesome.” 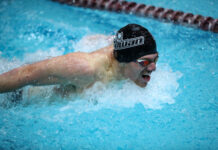