On Tuesday, Nov. 15, the Rowan women’s swim team defeated New Jersey Athletic Conference (NJAC) opponent William Patterson University 132-78. The Profs are now 2-1 in the NJAC conference and 3-2 on the season.

“The William Patterson meet was really fun,” Head Coach Elise Fisher said. “Once again I had the opportunity to put together a different lineup, where athletes could showcase some of their non-primary events. Pre-meet we talked about swimming without limits and that is what we did.”

Freshman Molly Klinedinst continued to build off her success in the team’s previous meet against Stevens last Friday. Against Stevens, Klinedinst won the 1650-yard freestyle for her first collegiate win.

“Winning the 200 and 500 free was a thrill for me, personally. Our team’s energy was amazing throughout the entire meet, which also helps me get ready to race and crave winning,” Klinedinst said.  “After winning the 200 free, I knew I wanted to go for it in the 500, so I prepared for my race and swam with an open mindset.”

“When I won the 100-yard breaststroke and 200-yard individual medley, I was beyond excited,” Kidchob said. “In a stroke and event that I didn’t know what I was capable of, I was glad to see a time and performance improvement.”

“The 50-yard breaststroke is an exciting event and one that definitely plays to my strengths.  I was really happy that I placed well in it,” Nelson said. “I plan to swim it at our mid-season meet, so I wanted to make the most of the opportunity to swim the race in a smaller setting while keeping our upcoming meet in mind.”

Rowan also claimed the next two spots in the 50-yard breaststroke. Kidchob placed second and Kinsey Ginsberg placed third. Nelson was excited to not only win, but to also swim with her friends.

“It was a really cool experience to swim a fun race like that with my teammates. I train in the same group with both Alexis [Kidchob] and Kinsey [Ginsberg] almost everyday,” Nelson said. “But we do not normally all swim the same events, so having that chance was fun.”

Senior Abbi Schick was victorious in the 100-yard backstroke, recording a time of 1:04.35 and the 200-yard freestyle relay with Pennington, Laura Jones, and Elizabeth Jones.

“I was really excited about how I swam,” Schick said. “I pushed myself as much as I could and it felt really good to get to the wall first.”

While the Profs performed well in the pool, Coach Fisher highlighted her team’s mindset.

“For this meet, we did not travel with five of our athletes,” Coach Fisher said. “With only 12 women on the road, I’m most proud of the energy, positive attitudes, and camaraderie that I saw from this meet.”

The Profs will continue to practice before and after Thanksgiving for the December 2-4 WPI Gompei Invitational located in Worcester, Massachusetts.

“Athletes will be expected to train while they are home for the holidays to maintain the work put in thus far. Monday, November 28 we can expect increased energy, more excitement, and to see some more speed as the week progresses,” Fisher said. “This time is exciting and the Thanksgiving ‘reset’ is exactly what I believe this roster needs before some fast mid-season swimming.” 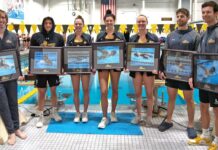 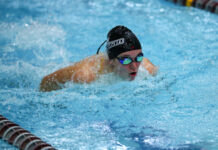