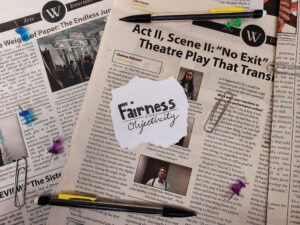 Lately, I’ve been grappling with the theme of objectivity in journalism. In most instances, as the Society of Professional Journalists (SPJ) Code of Ethics states, a fair and ethical journalist should remain free of biases and report objectivity. They must act with honor and consider only the facts of the matter. Personal opinions should be left at the door.

I believed that objectivity was the only way to be true to the journalistic endeavor. However, I recently attended MediaFest22, a journalistic conference run by SPJ and College Media Association (CMA), which made me question this belief. At this conference, I met two people, one Indigenous and one who was part of the LGBTQ+ community, who spoke about how they were told they could not report on Indigenous or queer topics. Two people with the most knowledge about their communities could not write about those topics because their editors felt as if they could not remain objective. This is where I find myself in conflict. What if the person who is best qualified to speak on a topic, is also someone who seems to have an implicit bias?

As a journalism student, Rowan has taught me to put objectivity and fair reporting at the forefront of my reporting. Media Ethics, News Reporting and Journalism Principles and Practices stress the SPJ’s code of ethics stance on seeking truth, reporting it and avoiding conflicts of interest when possible. The basis of my education is reliant on that core principle.

While attending MediaFest22, I had the opportunity to hear about this issue from various perspectives. From professionals to student journalists to advisors, they all brought up the same word — “fairness.” As media coverage has continued to expand, there is a growing trend in the industry of focusing on fairness over objectivity. We as human beings feel things. We sympathize, form opinions and relate things to our own understanding. It’s becoming impossible, if it wasn’t already, to be independent of every story we as journalists may tackle. Instead, the new standard it seems is to cover stories fairly rather than objectively.

In order to cover a story fairly, one must first fully acknowledge that they have opinions and biases. To be naive to this is to guarantee slanted reporting. Once the journalist is aware, they’re able to compare their writing to their own beliefs. If their writing sounds persuasive, they know they have to back off and look at the piece from a different perspective.

Dare I say all journalistic reporting should be free from advocacy and calls to action. By all means, cover the ideas of nonprofits, movements and underrepresented groups, but don’t show favor towards any one idea. If the cause is strong enough and the writing is clear enough, the reader should come to that conclusion on their own. True journalism, I believe, should provide the reader with all the facts they need to make up their own minds.

In the spring, I will be graduating and thrown into the ever-changing world of news media. It’s important to remember my education but also to keep an open mind. The world of journalism is filled with moral quandaries and fad-trends, so sticking to a personal moral and ethical code is the best way to steer clear of unfortunate mistakes.

EDITORIAL: Easing students’ stress in the face of internships and coursework