Following two straight victories on the road to kick off the season, Rowan football couldn’t keep the momentum going in their home opener, falling to Salve Regina University 28-24 in what was a back-and-forth battle.

The Profs got off to a hot start in this one. Following a 20-yard field goal in the first quarter by junior Jake Hurler, two touchdowns were scored in the second quarter, one on a Mike Husni quarterback sneak and the other on a long ball thrown to John Maldonado for a 50-yard touchdown. This made it a 17-0 game at halftime.

After the break, Salve Regina pushed back. The Seahawks would go on to score three unanswered touchdowns in the second half to make it a 21-17 game with 10:17 to go in the fourth.

“It was our mistakes,” Head Coach Jay Accorsi said. “We can’t afford to make the mistakes that we did. Needless penalties, missing assignments. I just asked the team, ‘Did they win the game or did we lose it?’ And they said we lost it. They were doing the same things they were doing in the first half, we just didn’t stay the course and do what we need to do to win football games.”

Defensive back Kevin Vandever, who led the Profs with a career-high 12 tackles, pitched in with what he thought went wrong for the Profs defense in the second half.

The Profs did not back down, however. On an offensive possession that showcased a lot of poise from Husni and the offense, the drive would be capped with a Maldonado touchdown, his second of the day and the second go-ahead touchdown in the fourth quarter this season.

“We saw they were in man-to-man, so we dialed up a play that would give us a little bit of a rub,” Maldonado said. “One-on-one situation to the corner of the end zone, Hus threw the ball up and let me make a play.”

It was then all up to the Profs defense to get one last stop and seal the game 24-21, and it was looking good until Salve Regina quarterback Jake Stack fired a deep ball that was followed by a defensive pass interference call at Rowan’s five yard line.

Even with the setback, the Profs defense hung in there and did not allow the Salve Regina offense to get in the end zone.

Unfortunately, the penalties would continue for Coach Accorsi’s team, as a roughing the passer call on fourth and goal put Salve Regina on the three yard line with a new set of downs. Stack would then run it in for the go-ahead touchdown with just 21 seconds remaining.

Vandever shared his thoughts on the defensive penalties for the Profs.

“I’m not gonna say they were good calls, but at the same time we have to do something about it,” Vandever said. “We can’t just mope around and complain about the penalties. Obviously that PI [passer interference], and then the roughing the passer call really hurt us, but at the same time we have to take advantage of opportunities they give us. That’s just a really tough loss, because after that fourth and goal it felt like we won and then they got four new plays. It’s tough to stop somebody eight times in the red zone.”

Coach Accorsi echoed Vandever’s statement about the last defensive series for the Profs.

“Mistakes, you can’t make them,” Coach Accorsi said. “We had a third and long situation, you miss a tackle. We have another third and long, we get a late hit penalty. We win the game, we have a late hit. You just can’t do that. You have to be disciplined. But again, it’s not just the defense, there were offensive mistakes too. We lulled there for a while and weren’t efficient offensively. And special teams, we made mistakes too. We’re too good of a team to let that happen, so we have to learn from it.”

Obviously, it wasn’t the sharpest game for the Profs. We will see how they respond in their next matchup against Christopher Newport University on Saturday, Oct. 1. 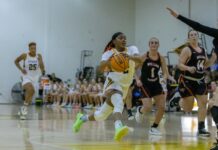