The Rowan University Foundation seeks to help entrepreneurs and inventors start new businesses. A further $20 million was given to the Rowan Innovation Venture Fund (RIVF), which was established with $5 million in 2014 to support the development of innovative start-up ideas.

This money will be used to support a pipeline of growing businesses from both inside and outside the Rowan community. This significant increase in revenue has strengthened Rowan’s commitment to a flourishing South Jersey economy by bringing the fund’s size to $25 million in August.

This boost in funding broadens the opportunity for additional students to start enterprises, produce jobs, and enhance our community. With a $25 million investment, the RIVF is one of the region’s largest venture funds from a public university.

“I had quite an understanding of the scholarships that would be offered for potential entrepreneurs or current business owners but I had no idea the amount of money that would fund this project,” said Brianna Reagan, a Rowan Junior. “I personally feel that it will be a relief to some business owners starting out like myself.”

While the RIVF invests up to $500,000 in scalable businesses, it is set to support a larger variety of businesses, including smaller start-ups that require less startup money. The Fund has so far given more than $2.4 million to businesses in the health sciences industry, more than $1.2 million to companies developing software and mobile apps, over $450,000 to telecommunications startups, and $150,000 to business owners in the food and beverage industry.

HALFDAY Tonics (formerly known as Topos Teas), a business started by two Rohrer College of Business alumni, is one of the early recipients of the fund. It creates a line of healthy tea drinks now available in more than 1,400 U.S. retailers, including Target and Publix stores. RIVF startup capital of $75,000, according to co-founder Mike Lombardo, was essential for getting the business off the ground. He founded the company with Kayvon Jahanbakhsh, a classmate at the Rohrer College of Business.

Another is MRIMath, a health science business that Rowan faculty members helped co-found. Among other things, MRIMath gives doctors vital knowledge for life-saving operations like radiation and surgical therapies for brain cancer.

The expansion of the RIVF would most likely open the door to many more entrepreneurs hoping to find funding to help in building their own businesses. 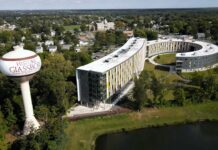