On Saturday, Sept. 17, the​ ​Chamberlain​ ​Student​ ​Center​ ​and​ ​Campus​ ​Activities (SCCA) hosted their sixth Rowan After Hours event at the Student Center for the year. Golf and Games was an event set up for all undergraduate students. These events are always set up to help students put themselves out there and meet new people.

The Rowan After Hours event lived up to its name when the Golf and Games started at 9 p.m. and went until 1 a.m. Whether you wanted to putt their black light mini golf course or just hang and play video games or board games, the SCCA had you covered.

Tiana Garcia, one of the staff members helping to run the Rowan After Hours event, provided advice for students who are hesitant to get involved.

“Come out to RAH. It is very high in socialization. People do come out, they make friends here
and it is late at night so they don’t have to spend their nights alone,” Garcia said, “It is also a safe space.”

From the moment of walking into the Student center until the end of the night, the pit was packed and
the course had people waiting in line to run through it. Overall, the turnout was amazing with the line waiting to check in to start playing starting at the stairs and wrapping around part of the second floor of the student center.

Garcia was very helpful and guided students through the check-in process and made things very simple. She described this event as a place for people to go and relax and not worry about going out somewhere if all they wanted was a more low-key Saturday night.

Among some of the students hanging out at the Student Center were Jake Sukoff and Mia Solomon. They had some differing experiences on the golf course with Jake even losing his ball at some point, but as he explained, he didn’t come out to win but to have fun.

“I thought mini golf would be fun and making new friends would be cool with me being a freshman and help me get more acclimated to the school. This event has been pretty fun so far,” Sukoff said.

Solomon had a similar opinion, despite being a junior.

“Even though I am a Junior, this is my first year since I am a transfer student so I want to go to as many of these events as possible to make friends and you know, get acquainted with the Rowan community,” Soloman said.

Maybe you are a new student and you might be a little scared to put yourself out there for an event like this, but you want to make friends. This is a feeling so many college students internalize.

“I would just say go and do the thing,” Solomon said, “You might go and surprise yourself and meet a bunch of new people, have a great time or even if you hate it, at least you can say you tried and they are all free so you aren’t losing any money. At the end of the day, you aren’t going to lose much” 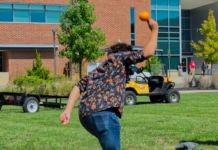