In the Rowan community, we are surrounded by so many students who always have that spark of creativity in them — who will sprinkle that across those on campus or even within the Glassboro community.

One such example is Alek Forty, a junior music industry major, from West Chester, New York.

Alek Forty, also known by his stage name “I.Amforty,” has always been passionate about his pursuit of becoming a well-known rapper. During a recent interview, he spoke about his beginnings.

“I listened to a lot of different types of music,” Forty said. “From when I was young, my mom would always blast R&B and hip hop music around the house, so that alone really exposed me to the world of that certain genre.”

In high school, Forty and his friends would drive up to the school’s parking lot and create little freestyles on top of beats found on Youtube, which inspired him to seriously pursue his passion.

During his junior year, he released his first song “Stats Sheet.” When he saw how well that song did, he knew making music was something that he wanted to do for the rest of his life.

Forty went on to discuss finding his muse.

“I would just go off the beat I would be listening to during that time,” he said. “It would [create a] spark [within] myself to really just go into depth and go based off the emotion in which I feel from the beat itself.”

Forty is drawn to pleasant music and strives to spread optimism and brightness; however, he also attempts to make music that his listeners can relate to. This blend, he explains, is comforting to him.

“Music might be many things, but I would define it as therapeutic,” Forty said. “I believe that without music in my life, I would not be the joyful person that my friends and family perceive me to be at this point.”

He argues that music has not only benefited him personally but also those around him, saying: “I’ve seen how the art of music has molded people all across the world, so to be able to be that person to create this art, to possibly be that sense of calm for someone else, makes me feel happy.”

He takes a lot of inspiration from rap artists like Kayne West, whose mother played a lot as he was growing up. He credits the artist’s work for helping to foster a love for music and inspiration to continue developing his craft.

He was first introduced to Kanye through the song “Heartbreak,” but it wasn’t until Forty watched Kanye’s most recent documentary, “Jeen-yuhs,” that he realized how successful he had become. It showed Forty just how successful he could become if he worked hard and remained devoted to his music.

Also, high on his list of inspirations is American rapper J. Cole.

“I really admire his work ethic,” said Forty. “His flow and delivery in his songs are very rare to come across these days.”

Forty went on to discuss how impressed he is by J. Cole’s ability to always provide a hidden, yet loud message, behind each song that advocates for certain socio-economic issues occurring in the inner cities areas.

Despite not having released any new music in the last year and a half, Forty is continuing to work towards his goals.

“I do have a music video and new music releasing by the beginning of October,” said Forty.  “I really do wanna put myself back out there, and really lock into the craft I love the most.”

I.Amforty’s recent singles on all streaming platforms, including Youtube, Spotify, and Apple Music. 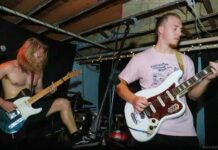