It was a long night for the Wilmington Blue Rocks as they spent almost three and a half hours playing ball against the Aberdeen IronBirds on Saturday, August 27, just to drop the game 11-4.

Trouble quickly came the Blue Rocks’ way when starter Andrew Alvarez showed signs of early struggles. Despite being able to get out of a bases-loaded situation in the top of the first, Alvarez would not have that same luck in the next frame.

To begin the second inning, Wilmington’s starting pitcher gave up four hits in a row, which drove in a run and left the bases loaded once again. Alvarez did manage to record an out, but then walked a batter and gave up one last hit, which both added another run to his stat line.

“I think there was a bunch of tough hits that they got, you know, it is tough. The pitches were executed, they just got a bunch of hits, singles, doubles,” Blue Rocks’ Manager Mario Lisson said. “That’s pretty much it.”

This would be where Alvarez’s night ended, but that wasn’t the case for Aberdeen’s scoring. A.J. Candelario was brought in for the Blue Rocks to try and stop the bleeding, but the relief pitcher only allowed Wilmington’s deficit to grow to 6-0.

The Blue Rocks would have a lot of work to do to come back in the matchup, and they started as soon as possible. In the bottom of the second, Wilmington strung together a series of hits and walks that would score three runs and cut Aberdeen’s lead in half.

Two innings later in the fourth, the Blue Rocks added on another run off an RBI ground-rule double from Leandro Emiliani, bringing the score to 6-4.

All of these efforts would become moot in the fifth inning. Rodney Theophile, usually a starter, was the second man out of the bullpen for the Blue Rocks and the man on the mound when the IronBirds scored three more runs to bring the lead back up to five runs.

“The second inning I went in there, I didn’t make some pitches,” Theophile said. “Gave up a couple of walks, and that’s when I gave up a triple and runs scored.”

This halted all the Blue Rocks’ momentum as it basically brought them right back to where they started in their comeback.

Despite the fact that the Blue Rocks would never get any significant offense going after that fifth inning, the IronBirds put up two more extra insurance runs in the later half of the game.

The Blue Rocks look to brush themselves off after two back-to-back losses to ensure they aren’t swept at home by the IronBirds. Wilmington’s last matchup against Aberdeen in the regular season is set for Sunday, August 28. 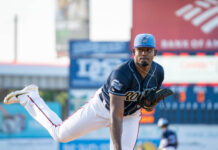