The Wilmington Blue Rocks were held scoreless by the Jersey Shore BlueClaws for 28 straight innings.

That was until the bottom of the first inning during their afternoon’s series finale, when Drew Millas blooped an RBI double in the vacant hole between third base and left field. This was the stepping stone to a 4-0 win for Wilmington on Sunday, July 31.

Besides Millas’ double, the long ball played a big role in helping the Blue Rocks snap out of their offensive funk. Kevin Strohschein blasted a solo home run to left center field in the bottom of fourth, his third of the year, followed by Jordy Barely smashing an absolute laser over the left field fence, a no-doubter to make it 4-0 Blue Rocks.

In what’s been an up and down season for Barley up to this point, he spoke after the game about how he was able to crush his second homer of the season and contribute to his team snapping out of their recent skid.

“I feel more comfortable now,” Barley said. “I made a little adjustment, and I feel better now up at the plate.”

In addition to the offense powering their way to victory, left-handed pitcher Dustin Saenz put forth an excellent outing in his third start of the year for Wilmington. Saenz tossed five innings, allowing three hits, no runs, and striking out four to earn his first win of the season for the Blue Rocks.

Saenz spoke about his mindset heading into this start knowing that his offense has been struggling.

“We hit a little reset button,” Saenz said. “We knew what we had to do. Once we got one, it was game over. Once we got that one, we stepped on the gas and didn’t stop. That was the plan, we just needed one. We stuck to our approach. We didn’t want to panic, we didn’t try to panic, and it ended up pretty good for us in the end.”

Overall, this series did not showcase the Blue Rocks in their top form. Wilmington lost four out of seven games to Jersey Shore, the team who is in last place in the South Atlantic League North Division.

Lisson shared what he thinks his team can take away from this series and improve on come the next time these two teams meet in mid-August.

“Be ready to hit the fastball,” Lisson said. “They have a lot of guys that can throw fastballs, so we have to get ready for it.”

Riding this momentum, the Blue Rocks will remain at home to kick off the month, as the Aberdeen IronBirds will roll into Frawley Stadium on Tuesday, August 2, to begin their home-and-home series with the Blue Rocks. 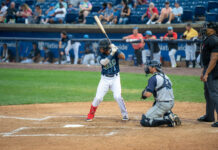 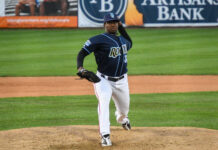