As the weather continued to heat up, the Wilmington Blue Rocks’ bats went cold.

The Rocks were held hitless through seven innings on Saturday, July 23, in what ended up being a one-hit, series-tying, 3-0 loss to the Hudson Valley Renegades.

“You have to give credit where credit is due and that is their pitching,” Blue Rocks Hitting Coach Tim Doherty said. “We left the zone a lot tonight… Putting balls in play that were not strikes… credit to them for executing those pitches and we didn’t execute our plan very well tonight.”

The Blue Rocks’ only chance came in the eighth inning when Kevin Strohschein delivered the first, and last, hit of the game for the Rocks. The next batter, Leandro Emiliani was able to draw a walk, giving them two men on base with only one away. But a strikeout from Drew Mendoza and a deep flyout by Jordy Barley ended the inning.

Prior to delivering the first hit, in the fifth inning, Strohschein delivered a sharply hit ball that was gloved down by Hudson Valley’s first baseman, Eric Wagaman, who chose to throw out Drew Millas at second base on a controversial close call that ended any momentum the Rocks could have gained.

“It felt like we never really had the momentum tonight,” Strohschein said. “They threw a lot of breaking balls and we got a little jumpy and swung at pitches we shouldn’t have.”

The Renegades scored once in the third, fifth and eighth innings. They started their scoring off with an RBI double by Eduardo Torrealba, which scored Pat DeMarco.

Shortly after in the fifth, they were able to execute a double steal to perfection that Trey Sweeney was able to score on. A sacrifice fly from Grant Richardson brought home Cooper Bowman in the eighth to make it 3-0.

The Rocks were kept off balance all night long, leading to many pop-ups and ground balls. Even when they were able to hit the ball sharply and put it in play, the Renegades’ defense was there to shut it down.

“We got ourselves out a lot,” Doherty said. “That’s the difference between what happens when we are swinging our best and when we don’t… We will have a plan going in [to tomorrow’s game] just like we did last night and last night we executed our plan and our approach.”

The Blue Rocks now head into a rubber match with the Renegades to see who will take the series.

“Tomorrow is a totally different game,” Doherty added. “That’s the great thing about this game is that there is no outcome, there is no script, it is just planning and execution.”

The Blue Rocks will look to execute their plan on Sunday, July 24, in hopes to win the series before going into a seven-game series against the Jersey Shore BlueClaws. 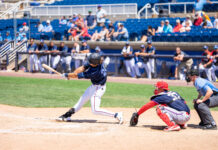