The Wilmington Blue Rocks showed some fight on Sunday, June 19, after an exhilarating 5-3 comeback win against their South Atlantic League North division rival, the Brooklyn Cyclones. The win split the team’s eight-game series with the Cyclones 4-4.

The Blue Rocks put themselves into an early 3-0 hole in the first inning after starting pitcher Seth Shuman plunked Brooklyn’s leadoff hitter, Tanner Murphy, in his hand and then allowed a three-run homer to cleanup hitter J.T. Schwartz. This would be the end of Brooklyn’s day offensively.

“Obviously, not how I wanted to get it started,” Shuman said. “My pitching coach came out here and told me that I just had to kind of flush it… I went back to work and just tried to take it pitch by pitch, one out at a time, and just keep our team in the ballgame.”

A solo home run in the bottom of the second inning from Omar Meregildo got the Blue Rocks started on offense, but it was the consistency of getting on base from leadoff batter Darren Baker that kept the train rolling. Baker was able to reach base three times in this game and scored the tying run in the bottom of the fifth inning on a sacrifice fly from right fielder Kevin Strohschein.

“It’s huge,” Baker said. “Mario [Lisson, manager,] and Tim [Doherty, hitting coach,] tell me all the time to set the tone… just get on base by any means and the other guys bring me home.”

The bottom of the fifth inning was capped off with a go-ahead two-RBI single by backup catcher Israel Pineda who replaced starting catcher Onix Vega after an apparent leg injury.

“I didn’t think too much going into my first at-bat,” Pineda said. “I just stayed with my approach, hit the ball through the middle and got that base hit so I feel great.”

Pineda’s hit would end up making a difference in this game for the Blue Rocks, as they completed their comeback and walked away with a 5-3 victory.

The Blue Rocks will get a day of rest before they face their rivals the Aberdeen Ironbirds who they also trail by 10.5 games in the division. After playing eight games in six days, the team is due for some much-needed rest.

“Huge,” Baker said on the rest day. “We were on the road for two weeks and then 14 hours on the bus isn’t easy and then we play eight games in a week so tomorrow will be huge and I know we’re looking forward to that.” 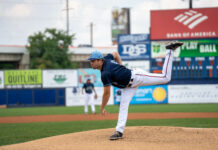 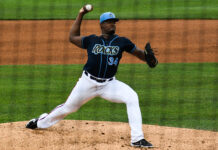