Looking to bounce back from a 5-4 loss to the Jersey Shore BlueClaws on Thursday, May 19, the Wilmington Blue Rocks were back in action on Friday, May 20, for the fourth game of the series.

The result was not what Wilmington anticipated, with the BlueClaws handing the Blue Rocks their second consecutive loss, defeating them 5-2, to even out the series at two games a piece.

“We missed an opportunity, we had bases loaded, nobody out, and we only got one run in,” Manager Mario Lisson said. “That made a big difference. But every game is different, so we just have to prepare.”

This game did not get off on the right foot for the Blue Rocks. The BlueClaws had an early 2-0 lead following the top of the first inning, thanks in large part to Ethan Wilson.

Wilson’s RBI triple, his eighth RBI of the year, scored Nick Matera after he reached first on a fielder’s choice and advanced to second on a throwing error by Darren Baker. Then, Wilson made a nice heads up play, scoring on a wild pitch from Blue Rocks starter Tim Cate.

Wilmington sliced the deficit in half in the bottom of the first with a solo shot hit by Ricardo Mendez, his first of the season, to cut the BlueClaws’ lead to 2-1.

“I always try to look for a fastball,” Mendez said. “Just stay in the middle, I’m looking for good pitches and I’m going to find them.”

With this blast, Mendez is now riding a four-game hitting streak, and he has recorded a hit in every single game he’s played this season, with the exception of one.

Lisson chimed in on the season that Mendez has been having.

“It’s good that he continues to hit like that,” Lisson said. “The idea is to stay consistent, that’s the game.”

Personally, Mendez is only worried about how he can contribute to wins.

“I don’t think about the hitting streak,” Mendez said. “I just think about how I can help the team win. I just focus on getting better every day.”

Cate cruised through the second and third innings, then the BlueClaws struck again in the top of the fourth. Wilson tallied another extra-base hit on a double to left field, then Casey Martin drove him in with an RBI triple to make it 3-1. Carlos De La Cruz got in on the fun, as well, with an RBI single to bring home Martin and extend the lead to 4-1.

It was then quiet up until the bottom of the sixth, when the Blue Rocks cut the deficit in half again thanks to an RBI groundout by Kevin Strohschein. Wilmington could not stay consistent, however, with an Omar Meregildo fielding error proving costly after it allowed Matera to score his second run of the night and make it a 5-2 ballgame.

The Blue Rocks were able to get back on track Saturday night, when they took back the series lead after defeating the BlueClaws in a tenth-inning 5-4 walk-off victory. Now, going into their game on Sunday, May 22, Wilmington is looking to finish out the series on top.

“We just have to make sure we take advantage of situations,” Lisson said. “Just execute, and we’ll be fine.” 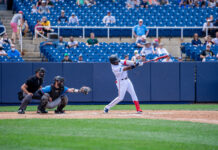 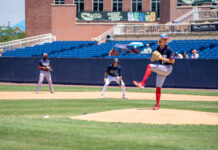 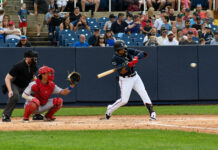