The Rowan women’s lacrosse team, who were previously on a three-game losing streak, are back in the win column after a successful weekend in Glassboro. This past Saturday, March 26, they dominated the Eastern University Eagles 21-2.

This was a much-needed victory for the Profs, as it gives them the reset to their season that they had been seeking. Coming into the game, Rowan’s coaching staff was dedicated to getting their squad back on track.

“We have NJAC [New Jersey Athletic Conference] matchups coming up,” Assistant Coach Lindsey Kate-Smith said ahead of the game. “We want to get back on track against Eastern [University]. There is a lot of season left and it all starts now.”

The game was only close in the first few moments of action, as Rowan and Eastern each put up a point in the first minute and a half; however, that was the only goal for the visiting Eagles until the fourth quarter. Meanwhile, the Profs would put up 19-straight goals.

Following the offensive explosion that occurred in the first 12 minutes, Rowan cruised their way to victory over the next three quarters. Goalkeepers Reilly Shaup, the starting senior, and Mel Rodgers, a junior, split time in the net and kept Eastern from putting on any pressure. Collectively, they were 100% on their clears after going 9-9 in the game.

Rowan’s defense also made the goalkeepers’ jobs easier, as they only allowed four shots on goal the entire game. Eastern turned the ball over 20 times, with 14 of those coming as a result of caused turnovers by Rowan.

The Profs also dominated the groundball battle, as they picked up 23 of them opposed to the Eagles’ six. Rowan essentially dominated all aspects of the game, which ultimately led to their crushing 21-2 victory.

Cohan had a monster game, as she accounted for five goals. That is the most she has scored during a single game in over a year, as she had not scored five or more since March 20, 2021, when she put up six goals against Kean University.

Chloe Shea, a senior attack, had two goals of her own and two assists. She also picked up a team-high six groundballs, which accounted for more than a fourth of her team’s numbers in that category.

While the seniors on the team certainly stood up and were major contributors to the big win, the freshmen on the team made their names heard as well. Attack Molly Green, a three-time NJAC Freshman of the Week, scored two goals and claimed five draw controls. Meanwhile, Calista Burke and Molly Horner, who are both also freshman attacks, added one goal apiece.

Rowan will hit the road for two more games this week, with their next matchup at Stevenson University this upcoming Wednesday, March 30. 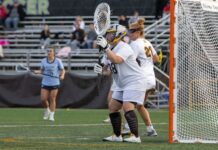 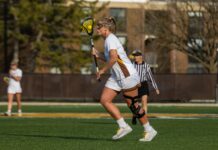 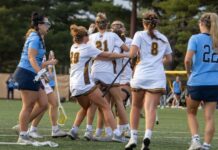