This game came against the league’s new developmental team, the G League Ignite, and was a scrimmage that did not count toward the Blue Coats’ regular-season record. Despite this, Delaware used this game as an opportunity to show how deep their roster is, as they defeated the Ignite 131-95.

The starting five consisted of players who had all spent time with the Philadelphia 76ers at one point this season. Their collective performance proved why they all earned NBA time. Right from the jump, Delaware looked like an NBA team and ended the first quarter up 40-29.

This was big for Delaware’s momentum and confidence considering that their past two games they had started slow on the offensive side of the ball, including their loss to the College Park Skyhawks on Friday, Jan. 28.

“Coming back off of a loss, we felt like we could have still won the game. We came out with really bad energy that game,” Blue Coats’ forward Braxton Key said. “So we knew coming into this one [we had to be] executing more on offense.”

Though Key’s team had a stacked lineup against the Ignite, it was the first time that this specific group of players had played together at the same time. The team was still able to create good chemistry on the court, as Blue Coats player Myles Powell explained.

“Me, Jaden [Springer], Charles Bassey and Charlie Brown [Jr.], we’ve been up with the Sixers, so we’re pretty much familiar with each other. We’ve been playing low-minute games up there,” Powell said. “But like I said, basketball is basketball. When you get a good group of guys who know how to play the game, it’s pretty much just following the coach’s plan and like I said, just executing it and that’s what we did today.”

The production throughout the day came from up and down the roster, with six Blue Coats ending the day in double-digits scoring. The highest-scoring player in Delaware on Sunday was Charles Bassey, who came off the bench and posted 24 points. 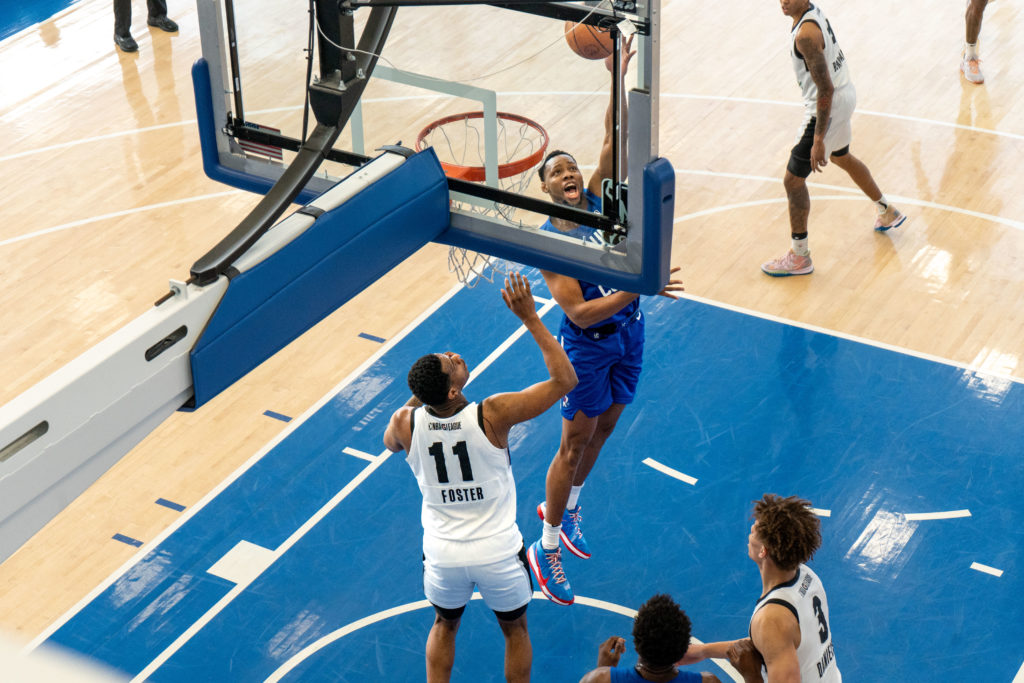 While there were a few guys like Charlie Brown Jr. and Shaq Harrison that returned to the team for this game, most of the guys played on Friday in the Skyhawks loss, which Key believed had helped figure things out for their matchup against the Ignite.

“Last game, we really didn’t know what each other could do, our strengths, where I think having that game under our belts, we got to figure each other out,” Key said. “I mean, even for the coaches it was difficult [because] they didn’t know who to put in, who jells together. I mean, today I started, Charles came out, so [we’re] trying to figure out different lineups.”

This win on Sunday allowed the Blue Coats to end their long, three-game weekend over 0.500, going 2-1 for the week. And while this game won’t help improve their regular-season record, it did allow them to prove something to the G League.

“We just wanted to bounce back. This is probably the first time all year that we got our full team,” Powell said. “We feel like we’re the best team in the G League, so we just wanted to come out and make a statement.”