Not only does “Spider-Man: No Way Home” perfectly encapsulate everything great about superhero movies, it actively makes up for all of the times Marvel and Sony have done wrong by their flagship character.

The premise of the film is simple: Spider-Man tries to clear his name after being falsely accused by Jake Gyllenhaal’s Mysterio at the end of “Spider-man: Far From Home,” the previous-best Spider-Man movie.

I was curious to see how they would outdo “Far From Home” and its achievements, namely, serving as a headstone for Tony Stark and delivering some of the most creative and engaging visuals of any film in this franchise.

Director Jon Watts’ strategy was to up the spectacle by about ten-fold, and he achieves this with every element of the film. In stark contrast to most MCU entries, this one looks like it has an actual director. It still insists on the flat, hyper-realistic color palette of its contemporaries- which looks particularly bland in scenes set during the day, but it’s made up for by action sequences that seem more well-choreographed than usual and shot composition that conveys characters’ powers exceptionally well.

You get this in sequences that involve Dr. Strange’s magic, but the best example is Peter Parker’s spider-sense, which forces us into this tight, claustrophobic perspective every time it flares. It feels sweaty and anxious and is reserved for only the most intense moments.

The spectacles continue into the script. I’m well aware that the script is primarily an excuse to give us what we all wanted (which we’ll get to), but I still think it’s worthy of criticism.

It has plenty of strengths, but its fundamental problem is its inability to manage three separate conflicts throughout the story. The post-credits scene in “Far From Home” cemented Peter Parker’s status as a fugitive hated by the public. Here, it makes for some pretty entertaining scenes, but the entire premise is just dropped within the first twenty or so minutes. It felt like a flimsy excuse for a Daredevil cameo- which keeps with the theme, I suppose, but having this storyline wrap up so quickly makes me question why it was included at all.

That leads into the weakest section of an otherwise excellent adventure. After their legal troubles are solved, the characters focus on getting into college, and it’s just impossible to care about. It’s supposed to juxtapose the grand nature of the next conflict, but having them still be in high school just feels like overkill. We’ve seen Spider-Man go on field trips, go to gym class and we’ve seen the awkward morning announcements show. We get it. Thankfully, the film remedies this by the end.

Lastly, the third, most-important conflict just kind of doesn’t make sense. Peter Parker enlists the help of Dr. Strange to make the world forget he’s Spider-Man, a course of action that simply isn’t necessary. At this point in the story, he’s been proven innocent, he pulled some strings to get his friends into college and there is no significant threat on the horizon. Also, none of the other superheroes in this universe have secret identities. People still hate him, but at the end of the day, that’s not his problem.

All of these issues hold the experience back a fair bit. But, around a third of the way into the film, it whips itself into shape, getting better and better with each passing frame. The action sequence that introduces Alfred Molina’s Dr. Octopus, while lacking on the cinematography end, can best be described as so deliciously “Spider-Man.” It’s intense, acrobatic and sets up an impressive level of dramatic irony. 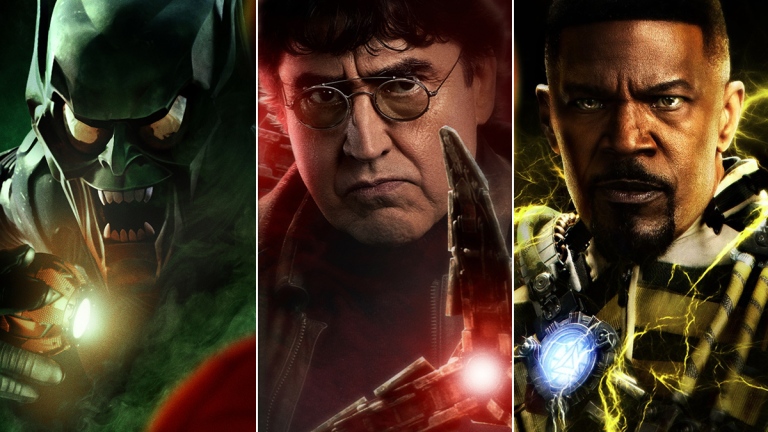 It somehow elevates to another level of awesome when Willem Dafoe- the most serious capital-A-Actor in the cast, begins his all-time, greatest performance as the Green Goblin.

Now, a major criticism of the Marvel Cinematic Universe (MCU) is its refusal to take itself seriously when it should, with constant quips and references to how silly it is often serving as apologies for existing. And don’t get me wrong, this movie is fun and lighthearted for a good deal of it, but it does not suffer from this problem. Once all of the villains from other universes are assembled, the fun is over. Every second that they are on screen is spent wondering when they’re going to snap, and when Goblin finally does, it starts a thirty-minute long sequence that was jaw-dropping. My mouth was agape as I turned to my brother in the theater and asked: “are they really doing this?”

After that sequence came the masterstroke of the film. The introduction of Tobey Maguire and Andrew Garfield is not a triumphant one, set to epic music during an intense battle scene. It’s not a cute, blink-and-you’ll-miss-it cameo. It is an extended sequence of pure character interaction, placed neatly next to the most intense moment of the story and poignantly highlights not only the tragedy of this movie but the tragedy of Spider-Man as a character.

Their inclusion is not just fanservice. The wonder and majesty of this extend beyond the screen. These two actors were robbed. They were perfectly cast as the most popular superhero and their portrayals of the character were celebrated. In the end, however, their respective runs ended in complete dumpster fires. There was supposed to be a “Spider-Man 4” and an “Amazing Spider-Man 3,” but they never saw the light of day because those series’ conclusions were two of the worst movies in the past two decades.

So seeing them on screen again, officially a part of the grand, enduring narrative of the MCU and finally getting the send-off they deserve? It’s beautiful. I’m not particularly fond of those iterations, but plenty of people were attached to those universes and invested in those stories, and they’ve finally been validated.

And this retribution carries into the comics as well. At the end, after the villains have been cured of their ailments, Peter and Strange try again, and the world does end up forgetting Spider-Man’s identity after all, including all of his friends. This plot point is ripped directly from “Spider-Man: One More Day,” which is still considered to be one of the worst comic book storylines ever written. Of course, it’s changed a fair bit to fit the context of the film, but the core of it is still there, and it serves as one final apology for another dark spot in the character’s sixty-year history.

There’s a lot more that I could criticize about this film. I could talk about how much I hate the multiverse as a storytelling mechanic. I could harp on Jacob Batalan’s Ned, the most annoying and pointless character in the MCU. I could lament the jettison of Zendaya from the franchise, just as she’s becoming a more robust and developed on-screen presence and cultural icon. If I did go into all of these things, I would just be a buzzkill.

In the end, the most succinct praise I can toss its way is this: if Stan Lee and Steve Ditko could see what their creation has blossomed into, they would be proud.