Rowan Football lost again on the road this week to Montclair State University 20-7, bringing them to 1-6 for the season.

Ultimately, Rowan was unable to capitalize on their first win of the season after they beat William Paterson at home a week prior

“We had a good gameplan, we just came out, [and] didn’t really execute well. Didn’t really expect them to waste the whole clock like that,” junior quarterback and Captain Mike Husni said. “It limits our possessions and our drives keep stalling . . . we just can’t get anything going, can’t get into a rhythm. So just a lot of frustration,”

Montclair possessed the ball for 40:56 and ran 71 plays, compared to Rowan who possessed the ball for 19:04 and only ran 45 plays. Possession is a matter that can often be traced to a team’s run game, both offensively and defensively, and the both sides of the run game were something the team struggled with this week, Head Coach Jay Accorsi explained.

Rowan was held to 48 yards rushing on 27 attempts. It was the least amount of rushing yards on the season for the offense and the first time they failed to reach the 100-yard rushing mark this year.

The game was the latest of offensive struggles for the team, marking the second time in three games that the Profs were held to seven points.

Now the Profs are preparing for their last home game of the season this Saturday against Christopher Newport University, who are 4-5 this season and are coming off an 84-14 loss against Salisbury University.

“We’ve just got to play better in all facets, you know, than we did last weekend,” Coach Accorsi said. “I think that’s what we really need to do. We need to run the ball better, we need to protect Mike [Husni] a little bit, throw the ball a little bit better, and we’ve got to be able to stop the run. I mean, it’s not really secretive, you know. It’s really what we need to do.” 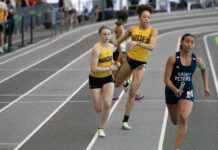