The Rowan rugby club’s game against St. Joe’s University can be described as a tale of two halves.

Both teams started aggressively, but it wasn’t until Rowan converted for the first time that a rhythm started to kick in.

Assistant Coach Bill Stom, who stepped in for Head Coach Tim Smith during the game, shared what he stressed to the team during the half.

“I told the guys not to change a thing,” Coach Stom said. “I told them they were completely dominating and to keep doing that. What I should’ve told them was to raise their level because I knew they were going to come out aggressive.”

What was 21-0 domination for the Profs was a completely different story in the last 40 minutes.

Turnovers, along with a lack of aggression, swung the momentum to the hands of St. Joe’s as they ripped off 17 straight points before missing a conversion to bring them within four points of the Profs.

Even the sidelines saw a shift in momentum.  What started as cheers and laughter changed to gasps and silence as St. Joe’s inched closer.

A key stop at midfield put the game out of reach though, and Rowan immediately roared with cheers as the final seconds ticked down for Rowan to survive a late comeback by St. Joe’s.

The final score was 21-17 and Rowan moved to 3-0 on the season. St. Joe’s on the other hand lost their first game of the season, putting their record at 3-1.

Coach Smith is now looking towards next week’s game against Salisbury University.

“The season isn’t even near over and all the teams we are going to face are only going to get better,” Coach Smith said. “So we need to take it up a notch and play at a high level.”

Rowan faces Salisbury on Oct. 16 at home with hopes to extend their undefeated season to 4-0. 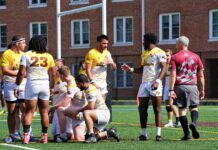 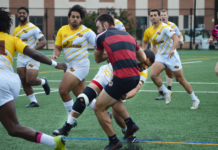 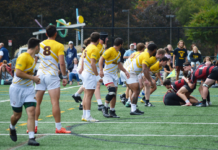