*Editor’s Note: In the print version, we said that Democrat Phil Murphy was running with Lt.-Gov. Diane Allen, and that Republican Jack Ciattarelli was running with Lt. -Gov. Sheila Y. Oliver. We apologize and have fixed the mistake in the online issue.

Upon the upcoming New Jersey General Election on Nov. 2, 2021, Rowan University announced early voting sites on two of its campuses. Early voting provides a nine-day window before the election. All early voting sites will be open from Saturday, Oct. 23 through Sunday, Oct. 31, from 10 a.m. to 8 p.m. daily, and 10 a.m. to 6 p.m. on Sunday.

For Gloucester County voters, the designated polling area will be in Room 144 in the Chamberlain Student Center, located at 201 Mullica Hill Rd. in Glassboro, making it one of five early voting sites in Gloucester County.

As for Camden County voters, polls will be in the Academic Building on the Camden campus, at 129 N. Broadway, Camden.

The information for State Senate and General Assembly candidates for all counties can be found under the 2021 Election Information page on the NJ Division of Elections website. Two questions will challenge the state constitution and propose amendments. The topics include permitting gambling on collegiate athletic events and authorization of organizations to revitalize raffle proceeds to promote their group.

Please visit the NJ Division of Elections website page on nj.gov to read each gubernatorial candidate’s statements, and also for any other questions regarding the voting process. Other resources, such as news coverage or candidate campaigns — specifically, the gubernatorial debate held at Rowan’s Pfleeger Hall (which can be viewed in full on the NJ Spotlight News YouTube or C-SPAN website) — will further one’s knowledge and allow them to arrive at an informed decision.

According to CIRCLE, an independent research group from Tufts University, it was found that during the 2020 presidential election, “New Jersey had the highest youth voter turnout [ages 18-29] in the nation: 67%.”

Young voters are a keystone to democracy. By virtue of legislation allowing early voting, more opportunities are available for all constituents to vote — especially at Rowan, where college students may not always have access to a polling place off-campus.

There are three methods of voting in New Jersey: vote-by-mail, early-in-person voting and at your assigned poll on Election Day.

To vote by mail, request a ballot by following the instructions on vote.nj.gov or contacting the county clerk. You will receive a ballot, certificate envelope and mailing envelope. Using blue or black ink, fill out the ballot and sign the certificate envelope. Return via either mail, at a secure drop-off box found throughout the county or deliver it to the Board of Elections in your county.

Unless otherwise noted by the polling place, voters are asked to wear face masks and practice social distancing. Note that New Jersey does not allow same-day voter registration, and if you’ve previously voted in New Jersey, no identification documents are required to vote.

If you do not live or are not registered to vote in New Jersey, visit your state’s webpage to review voting policies.

The Whit encourages all voters to exercise their constitutional right and vote on Nov. 2, 2021. 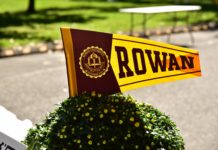