When I began to apply to colleges during my senior year of high school, I tried to imagine what my life would look like as an undergraduate student. Like many angsty 17 year olds, I pictured myself dancing in a pitch black basement with flashing neon lights and, of course, a red solo cup in hand.

This fantasy was all I ever imagined college to be growing up. My parents couldn’t tell me about their college experience, because they dropped out after a semester. And my brother and I didn’t talk much when he was away at school. I relied on movies like “Neighbors” or “College Road Trip” to set my expectations for college life. Looking back now, as a senior at Rowan, I laugh thinking about the experience I thought I would have and the experience I actually got.

Don’t get me wrong, I am not writing this to unload four-years worth of FOMO onto anyone. Rather, I hope my story brings comfort to those, especially freshmen, who may be feeling the pressure of having to “live it up” this year — since the pandemic made it hard to go out last year.

The truth is, your time at Rowan may not look like what you see in movies. You may realize you spent more late nights in the library than at a frat house, or more time walking to class alone with your earbuds in instead of hanging out with your friends—and that’s okay.

While all my friends went to big universities, I went to Atlantic Cape Community College, which was only a 20-minute drive down the Black Horse Pike from my house. On my first day of school, I walked into the cafeteria and saw dozens of students. While some were eating and chatting with their friends, most of the students were writing in notebooks or on their laptops.

I saw one girl at a table by herself. She had a black hoodie on and her eyes were fastened to her computer screen.

“Is this seat taken?” I asked.

She didn’t acknowledge me at first, but after a second or two she noticed my lingering presence.

“I’m sorry, what?” she said as she pulled out a single earbud.

I repeated my question, which was followed by a dismissive “No.” I set my belongings on the table and anxiously awaited her to start a conversation. She was silent.

“First day?” I asked. I don’t know whether she saw my lips moving in the corner of her eye, or she heard the mumbles of my voice underneath the sound of her music, but she looked up from her computer to me, we held eye contact for what felt like an eternity, she closed her laptop and left.

It was at that moment that I realized, community college was the wrong place to find a forever friend. At least, that’s what I thought until my sophomore year.

During my second year at Atlantic Cape, I started to get more involved with the journalism department. I started to hang out with peers between classes and, eventually, we became inseparable—getting Olive Garden before our night class became our thing.

One of the highlights of sophomore year was becoming the assistant editor of the college newspaper, The Atlantic Cape Review. Stepping into a leadership position was a new challenge for me. I had never been in charge of anything or anyone.

After the first ACR meeting, the editor-in-chief, Gianna, and I both knew we had our work cut out for us. If I had a dollar for every hour we spent reading and editing articles, I’d be a millionaire. There were days we’d get to campus at 8 a.m. and leave at 10 p.m. — only because the security guards were starting to close down the building and told us we had to leave.

Even though those nights were brutal and long, they were fun. Were there times I wanted to gauge my eyes out? Of course. Did I have at least three mental breakdowns a day? Absolutely. But at the end of the day, what I remember most are the late nights working on something I was passionate about with my friend.

While I transferred to Rowan only last year, I’ve gotten involved with everything that has to do with the career I am trying to pursue. I want to be a TV reporter. I am the co-editor-in-chief at The Whit, and the communications director for the Rowan Television Network.

In both these organizations, I’ve met some of the most amazing people, and I’ve learned so much about not only the industry I am going into, but about how to be part of a team.

For much of my college career, I’ve always thought I had to pick between working hard or having fun — aka the typical college experience. Looking back as a senior, I have realized that I’ve had the college experience all along. It may not look like TKE’s basement, but getting the opportunity to work for organizations that I am passionate about — and work alongside people who have that same passion — is just as worthwhile. 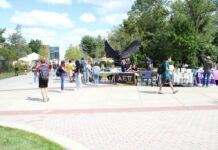