The Center for the Advancement of Women in Communication hosted “Smithsonian and Stickley: Communication Careers in Museums” on Friday, April 9.

The virtual event featured two women, Vonda Givens and Julissa Marenco, leading remarkable careers in communications. Givens is the executive director of the Stickley Museum at Craftsman Farms. Marenco is a Rowan alumna and the chief marketing officer for the Smithsonian Institution.

Givens and Marenco discussed what they described to be their highly unexpected career paths in communications, while also providing tips for women looking to enter careers in museums and public spaces.

When Givens moved with her husband to New Jersey for his graduate school program, she was struggling to find a job that she loved, and began to think back to a job that she had — and thoroughly enjoyed — when she was an undergraduate working at a museum.

She quickly rediscovered her passion for working in that industry, though she had previously never considered the possibility of it becoming a long-term career.

“When I was sort of struggling in my life, I thought, ‘Let me go back to something I know I love,’ and it really has paid off… one of the great things about working in museums is that there is no typical day… I don’t know what it means to be bored at work,” Givens said.

Marenco was a radio, television and film major at Rowan, and wanted to get into Spanish language television after graduation. She went to New York City to work in television before eventually running her own station in Washington, D.C. Marenco’s career then took an unexpected turn when the Smithsonian recruited her to its team, although she had no previous experience working in museums.

“If you would have told me that I would be part of the leadership team at the Smithsonian or working in museums — or any kind of interest in museums — I would not have believed you… but I quickly learned how many similarities there are between television and museums,” Marenco said. “In television you have the reporters that are telling the stories; in museums we have the curators telling the stories, and we all know how very important it is to tell the stories, how they tell those stories and through which lenses.”

According to the speakers, neither one anticipated a career working in museums given their degrees in communications. However, these very degrees actually helped them on their current paths, allowing them to elevate their day-to-day communication, storytelling, writing and relationship-building skills.

It hasn’t always been easy.

Over the last year, the coronavirus caused a major pivot in both of their responsibilities at work. The Smithsonian had to focus more on what they could develop digitally. Despite the challenges, using their online platform allowed people to see artifacts and objects that they otherwise wouldn’t have been able to see.

“We’re probably doing better and stronger digitally than we probably would have done had the pandemic not happened… it’s allowed us to focus heavily on our educational tools,” Marenco said.

The floor was then opened to attendees for questions, the first being related to internships and the hiring process. Givens had advice for what organizations are looking for in new hires.

“The acronym SWAN. Somebody who is smart, works hard, is ambitious and is nice. Those are really things that are valuable,” Givens said.

The importance of finding a balance between being nice while also being assertive, as a woman, was also stressed by Givens and Marenco.

According to Marenco, there is no cheat sheet to the working world, and no matter what you pursue, you must give it your all. 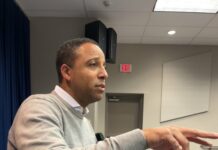 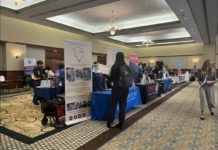