On election day, about 67% of New Jersey voters cast ballots in favor of legalizing the possession, sale and use of cannabis for adults 21 and over.

Currently, New Jersey has a 6.625% sales tax on medicinal cannabis. According to NJ.com, the amendment also authorizes the legislature to enact a law letting towns and cities collect a tax on cannabis of up to 2%.

New Jersey’s sales tax on cannabis falls below states like Massachusetts, whose consumers pay 17-20% in tax on marijuana purchases.

After the Jake Honig Compassionate Use Medical Cannabis Act (Honig Act) passed on July 2, 2019, the Cannabis Regulatory Commission was born to replace the state’s Department of Health’s regulation on medical cannabis.

The young commission gains more power with the legalization of cannabis; it’s responsible for regulating personal use and medical cannabis, while at the same time providing expungement relief for certain past offenses.

According to NJ.com, “The commission is poised to take over the state’s medical marijuana program from the Department of Health, which currently has licensed 12 companies to grow, process, and dispense medical cannabis.”

Out of the five total members of the commission, Gov. Phil Murphy will appoint three seats, including the chairmanship, while Senate President Steve Sweeney and Assembly Speaker Craig Coughlin appoint one each.

Those in favor of legalization in NJ cite racial injustice as a critical argument for the state to legalize and expunge criminal records surrounding cannabis.

According to a report by the American Civil Liberties Union (ACLU) in March 2017, “The racial disparity in marijuana possession arrests reached an all-time high in 2013. That year, Black New Jerseyans were three times more likely to be arrested for marijuana possession than whites, despite similar usage rates.”

In addition, “In 2013, marijuana possession arrests made up 88 percent of total marijuana arrests statewide. In other words, nearly nine out of 10 arrests made for marijuana were not of dealers or kingpins, but rather New Jerseyans who possessed the lowest amount counted by New Jersey law.”

The study also found that New Jersey wastes more than $143 million per year to enforce our marijuana possession laws, highlighting another key argument for the legislation: the economic benefits the cannabis industry could bring to the Garden State.

According to “The State of Legal Marijuana Markets, Sixth Edition” (SOLMM6), consumer spending on cannabis could reach $23 billion by 2022. Considering the high population in New Jersey, the state could follow consumer trends and contribute significantly to national cannabis sales.

Those who oppose the legalization of marijuana cite youth use and an uptick in driving under the influence as severe public safety threats.

The researchers argue that it is more difficult for teenagers to obtain marijuana since licensed dispensaries that require proof of age will gradually replace drug dealers.

The threat of driving while high is still a gray area for both police and researchers. The National Highway Traffic Safety Administration (NHTSA) conducted a high driving study in 2013–2014 that showed a 48% increase in weekend nighttime drivers testing positive for THC from 2007-2014.

States have different protocols to handle a potentially high driver, yet no concrete way to determine the level of impairment cannabis has on an individual. One solution is drug recognition experts; officers trained to identify people whose driving is impaired by drugs.

Drivers have no way of knowing how much cannabis would put them in a dangerous position to drive, making it even worse for communities and police to ensure safe consumption habits.

It’s not certain when New Jersey will see the first recreational dispensaries because state lawmakers need to pass a comprehensive bill surrounding rules and regulations of the legal weed industry. There is still a potentially long road to dispensaries, as it took Massachusetts two years to pass a similar bill. 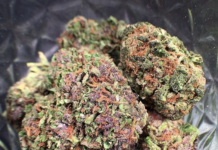