This past Wednesday, Rowan University’s geology department chair Dr. Harold Connolly invited his students and fellow faculty members to participate in a watch event for the successful asteroid sample mission of the OSIRIS-REx spacecraft.

“Having the whole department there, colleagues, students, you know, it was a real wonderful sense of family, and it was really great,” Connolly said of the event.

Connolly is also the mission sample scientist of the team responsible for this successful space mission. NASA’s OSIRIS-REx successfully touched down on the ancient asteroid Bennu on Wednesday evening and will return the collected samples in 2023.

Connolly detailed his role in the many years of planning and preparation that went into the mission, which is the first time NASA has collected samples from an asteroid.

“I work very closely with all the aspects of the sample, not just when it returns and to be part of the lead team that analyzes it, but also how the sample came to exist, why it is the way it is on the asteroid, where did it come from before this asteroid was formed, how did this asteroid get where it is today, that kind of science problem. So everything related to the rock,” Connolly said.

Connolly also discussed why the samples from Bennu would be invaluable to not only the scientific community but humanity as well.

“Meteorites that fall to Earth, we’re not really sure which specific asteroid [they] came from,” said Connolly, “and [by] revealing the treasures that [Bennu] has preserved for billions of years, we can better predict possible disasters by large-impact events. To better help predict the way in which asteroids move through space…we need to know the composition and thus better protect humans and society in general.”

Connolly is a sample scientist who studies meteorites, a petrologist who studies rock and a cosmo-chemist who studies the chemistry of outer space. He is also a personal friend of Neil DeGrasse Tyson, one of the most prominent voices in the astronomy field.

“I’ve had drinks with that man many times,” Connolly said. “A really wonderful person; he’s a very kind and sensitive man as well.”

On top of all that, Connolly is a professor in Rowan University’s School of Earth and the Environment who was happy to share this historic mission with his home community.

“It’s been great coming to Rowan University, back home to South Jersey where I was born and raised, being a member of the faculty at Rowan and bringing this great mission with me to share with the community where I was young,” Connolly said. “I would go to [the] Delaware Valley Earth Science Society, and I can remember watching space missions like Voyager on the television, and now here I am part of one. It’s totally cool.” 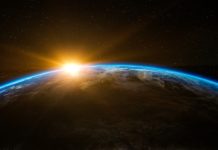