The Rowan Environmental Action League (REAL) hosted a virtual discussion on Wednesday, Oct. 7 with Marcus Sibley, the communications, press and publicity chair for the New Jersey state National Association for the Advancement of Colored People (NAACP) to discuss pollution.

Sibley is also the environmental and climate justice chair of the Southern Burlington County, New Jersey NAACP. The discussion featured Richelle Lee, the communications, press and publicity chair for the Camden County NAACP #2080.

“Pollution has no jurisdiction,” Sibley said. “The wind will blow anywhere. Just because something is in one place, everyone around that place will be impacted and we have to really think about that.”

A big problem in Camden County is the trash incinerator that has been there for 29 years.

“Trash incinerator burns everything,” Sibley said. “Those things go up into the air and go into our lungs. We are fighting a fight without realizing we are even in a fight and that’s the part that’s unfair.”

Sibley also stressed how attending city council meetings is essential to getting environmental policies through.

“Proposal goes to city council, [who vote on] whether it proceeds, then goes to planning board, then that vote happens. Then additional steps for permits,” Sibley said. “You only get a few opportunities to fight before [incinerators or other environmental costly things] get installed.”

Sibley then discussed his career as an environmentalist and the hardships that come with it.

“This particular field requires manufactured energy. We have to continuously motivate ourselves because we’re dealing in an area that a lot of people don’t give a lot of respect to. We don’t get the love that we deserve, but everyone benefits from our work. It’s kind of something you weigh out. It’s going to suck at times, but you have to generate your own energy,” Sibley said.

Although it can be a thankless job, Sibley and Lee went into the importance of being involved in politics.

“You have to get involved in politics,” Sibley said. “A lot of people, especially young people, say it isn’t their thing, which is cool, but politics decide everything that impacts your life,” Sibley said.

He explained that it’s up to the students and the people to get their voices heard and fight for what is right for the environment, and against things that can harm everyone. It is up to the people to ask, “why is this happening?” and “who is really going to benefit?” 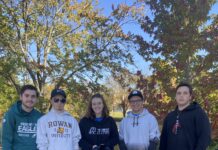 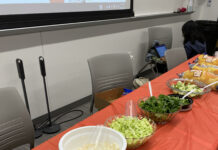