Coming off of a tough loss the weekend prior to division rival Stockton University, going undefeated was a must.

“Going undefeated was huge for the team, especially after losing an important game the other week,” senior forward and captain Anthony Gallicchio said. “It gives us the confidence to push forward and get to nationals.”

Unfortunately, the Profs did not anticipate that their hardest competition of the weekend would be against the Collegiate Hockey Federation (CHF) officiating.

The Brown and Gold dominated their first game of the tournament against Stony Brook University 5-1. The following night, Profs beat Hofstra University 5-4 in another all-to-familiar overtime.

The following day, Rowan faced off against Southern Connecticut State University in a game heavily impacted by what was arguably the worst officiating on any level I have ever seen.

A goal from the blue line by Gallicchio pulled the Profs ahead 1-0 towards the end of the first period. Rowan had their chance to swing the momentum in their favor to start the second, but the refs had different plans in mind.

With half of the period remaining, the Profs were riddled with nitpicky penalties, at one point causing their penalty box to be a party of five. A chippy second period came full circle when a fight broke out in front of SCSU’s net with less than a minute left.

Prof’s defensemen Stephen Seeley was then forcefully ejected by an official.

The ref physically throwing Seeley into the boards was unwarranted and inexcusable.

With time left in the second, both teams were sent to their locker rooms with no confirmation of whether there would be a third period.

After a quick clearing of heads, both teams were able to return to the ice for the third period. The Brown and Gold went into the period five players down from ejections, as well as without their Head Coach Frank Gerbasi.

With the Profs having to adjust to being without some of their powerhouse players, SCSU was able to score an even-up goal.

The egregious abuse of power by CHF officials, as well as numerous blown calls, lit a fire in the Profs. Rowan forward Zack Faust was able to secure the final goal bringing the game to a long awaited 2-1 finish.

“From here we need to look forward,” Gallicchio said. “Keeping our goal [of nationals] in view by winning every game possible and sticking to what we know.”

The Profs are currently still holding a second place seed in the American Collegiate Hockey Association (ACHA) Atlantic division rankings. If they can continue to play hard and win, they will secure the first bid to Dallas in the team’s history.

“As long as we keep doing what we’re doing, we’ll be fine. The only way we’ll lose our spot is if we fall apart from the inside like in past years,” senior assistant captain Zachary Turcotte said. “There’s too much heart on this team to let that happen.”

If the Profs can clean up their defensive zone coverage and puck handling, they will be a force to be reckoned with in their division. The boys will be back in action at Salisbury University on Dec. 8 for another competitive matchup. 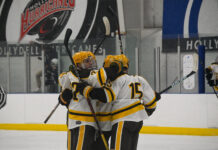 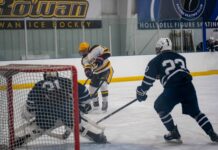 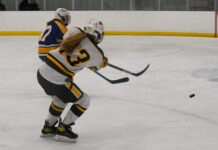