Junior biochemistry major Emily Kopchick likes to talk about how the human body wasn’t physiologically designed to swim – and that even so, it swims anyway.

As the top-ranked breaststroker in the New Jersey Athletic Conference (NJAC) for 100 and 200 events, Kopchick knows a thing or two about proving assumptions wrong.

Kopchick isn’t just nationally-ranked and fresh off a stint at National Collegiate Athletic Association (NCAA) Nationals as an underclassman – she’s also a science technology engineering & math (STEM) scholar with her eyes on medical school. Unlike many other Rowan students, she knows her way around both the chemistry laboratory and the pool.

“With biochem you need have grit, analytical ability, and attention to detail,” Kopchick said, “and I think that translates over to swimming.”

When not smoking the competition in the 100-breaststroke, she also assists in the lab of Department of Chemistry & Biochemistry Associate Dean Dr. Gregory Caputo, researching how antibiotic drugs interact with anti-microbial ionic transition metals. She is the lead author of a project slated to present at a national American Chemical Society conference this March, with outcomes that could have far-reaching impacts within the medical field.

“It’s something called synergy,” Kopchick explained. “It’s when the ionic metals and the antibiotic work together to make a new and powerful drug.”

“Synergy” is a good way to describe the relationship between Kopchick’s academic and athletic careers. While some skeptics might doubt that swimming has much to do with biochemistry, Kopchick disagrees. In fact, she believes that both of these interests feed off one another in positive ways.

“I do not think that I’m a naturally talented swimmer,” she admitted. “When I was a club swimmer in high school, I was always the shorter girl. I was never interested in it; my priority was always school. Swimming was more of an outlet for me, a catharsis. I would take out all of my frustrations from school, and it was just a way that I could be by myself and just be alone in my thoughts and clear my head. I would feel so much more focused after swimming.”

“My last year of high school, I realized that could be my last year swimming competitively in my life,” Kopchick said. “I just became very passionate about it because I realized that my time was limited. Rather than me grieving about it, it made me more motivated.”

Most obviously, her education has helped her understand the mechanics of the human body, with natural applications in hydrodynamics. Given her athletic successes, Kopchick’s science background seems to have paid off.

“I like analyzing my races and looking up swimming science and hydrodynamics,” she said. “You ever hear of the kinetic chain? It’s the way that all your muscles interact. It’s not only macroscopic, in your body and technique, but in order for you to function macroscopically, you have to have the hydration, nutrition – everything has to be in balance on a molecular level before things work optimally in the grand scheme of things.”

However, Kopchick’s swimming career has not come without its share of challenges. Swimmers are traditionally tall. At 5’3″, Kopchick is one of the shortest swimmers on the team.

She credits Rowan’s swimming coaching staff and her Rowan swimming and diving teammates as her greatest resources in overcoming challenges. According to Kopchick, she would not be as successful in 100 and 200 races – her top events – without their fine-tuned sprinting program.

“We get individualized swimming attention from [head coaches] Brad [Bowser] and Elise [Blaschke], and they give you genuine feedback – not only about your races and your technique, but about who you are as a person. I always was a breaststroker, but then I got so much better because of the culture that the coaches have facilitated and nurtured,” she said. “Being around my teammates, we’re all like-minded people in the sense that we all have been swimming for a fair amount of our lives. We all love it enough to do it every single day. It’s a community where I know I’m not alone.”

But overall, she believes that the most important thing is enthusiasm for all facets of her life.

“I think I got where I am now through hard work and sweat…and also passion,” Kopchick said. “I think passion is the main driving force. A growth mindset is what differentiates high-achievers from people who are just mediocre; it’s sometimes just sheer persistence. It’s what separates people who are just part of the crowd from the people who are outstanding. It’s not glamorous, and it takes a while, but some of the best things in life are not achieved easily.” 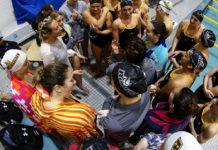 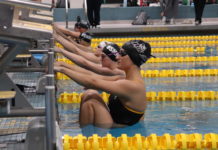 Women’s swim and dive wins at METs, Blaschke named Coach of the Meet 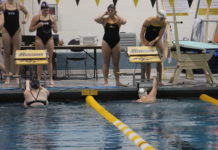