“I want you to imagine you have never seen this image before…” Miranda Massie instructed the audience last week at her campus-wide presentation entitled “No Time to Waste: What We Need to do for Sustainability and Climate Progress.”

Massie came as an effective motivator who hopes we ban together to combat climate change. The time is now to act; the Intergovernmental Panel on Climate Change states a necessity to keep global temperatures below 2 degrees Celsius before unparalleled natural disasters occur.

Last Wednesday night, the Student Center Ballroom was filled with students, faculty, staff, community members and the deans of all 14 colleges at Rowan, each with eyes closed, waiting for the image on the screen.

All eyes open and there it was: a picture taken from space of the planet that you, me and 7.7 billion other humans call home. Yes, our lovely 4.543 billion-year-old blue and green Earth looks so beautiful and peaceful from far away. But down here, we know that our planet is struggling as climate change threatens our future.

Miranda Massie came to Rowan in hopes to educate and motivate us to be catalysts for change. She is the founder and director of the Climate Museum in New York City and has a background in history, with degrees from Cornell University, Yale Graduate School of Arts and Sciences and New York University School of Law. None of her degrees deal with climate change and her career was no different, spending time as a civil rights impact litigator and a prestigious lawyer.

She left that life behind once she saw the devastating effects of Hurricane Sandy. First hand, she saw how climate affects us. Her response was to create the Climate Museum with a mission to educate and engage guests. Rowan University had the privilege to hear her speak about past, present and future climate issues.

Everyone has a varying grasp on the intricacies of how our planet is struggling with climate change, but I venture to say that people are starting to take notice of this topic, as the Collins Dictionary named ‘climate strike’ as the 2019 word of the year.

Massie noted this spectrum of understanding and provided a general definition of global warming: a climate change phenomenon attributed to high levels of carbon emissions due to the burning of fossil fuels. Despite the overwhelming arch of climate change, Massie said she remains optimistic, as there have already been strides to prevent future damage. In the 1970s, the Environmental Protection Agency was created, along with legislation to combat environmental abuse.

Massie spoke of a success story in the battle of climate remediation. There exists an ozone layer surrounding our planet, acting as a protective upper atmosphere that absorbs harmful ultraviolet radiation from the sun.

However, over Antarctica, there is a hole in this layer, and its creation was linked to chlorofluorocarbons (CFCs), formerly abundant in aerosol sprays and refrigerants. Once this culprit was confirmed, CFCs were banned in 1996 and scientists observed the hole slowly reduce in size. Massie shared this story as a mini-victory for what can be accomplished when people band together in environmental action.

Another small victory in the climate battle is at the Lipari Landfill, which is in nearby Pitman, New Jersey. It is a testament to an environmental protection policy set in place by President Richard Nixon in 1970.

Today, it poses no threat to the approximately 20,000 students at Rowan University. Massie provided this example not only to explain an environmental issue close to home, but because the Lipari Landfill was ranked the worst toxic dumpsite in the United States and now is deemed safe. This success story gives us hope for future efforts.

Next, Massie talked about the current exploitation of resources. She talked about Earth Overshoot Day, which is a timestamp for when all the resources that can be regenerated in a year are used up. As humans consume more and more, Earth Overshoot is moving earlier and earlier in the year; the last one falling on July 29, 2019. The continual push back takes hypothetical resources from future years. Miranda Massie explained how detrimental it is for humans to dig into resources we can not sustainably harvest.

This is really just the beginning. The beginning, that is, of learning about past and present climate problems compelling you to take initiative.

The Youth Climate Movement with global days of protest has been reformative; hence ‘climate strike’ being noticed as such a buzz word this year. That being said, we need to take action, but moving forward, how can we help?

Massie urged us, the generation that will inherit the planet, to vote! 2020 is an election year and so many candidates have the climate on their minds. Make sure you vote for a president and government officials that promise they are in it for the Earth. Climate change is currently not considered a “crisis” by the government, but if it were recognized as such, more focused and intense plans could be made.

Next, if you haven’t already, get involved on campus. Voices are so much louder in numbers! Help out with Rowan’s Food Recovery Network, attend Student Government Association senate meetings to stay informed, volunteer for campus and community clean-ups with the Office of Volunteerism and join the Rowan Environmental Action League (REAL).

Education is so important when it comes to the topic of climate change. It is opportunities like attending presentations given by individuals like Miranda Massie that we need to embrace in the future. We must engage with knowledgeable figures and listen to environmentally focused lessons.

Above all, we must leave each interaction ready and willing to spark change. Don’t let the fear of not knowing enough ever stop you from spreading messages of climate change. Massie confided that she has no background in science and doesn’t know the chemical intricacies behind greenhouse gas formation. Her true message lies in activism. She said regardless of age, background or social standing, we are all affected by Earth changes. Climate change is a universal topic that every human needs to take action on.

Just as Massie started her presentation with a view of Earth from space, sometimes we just need to zoom out and realize how miraculous it is to be alive and how much gratitude we owe to the Earth. Now as you prepare to embark on a journey of climate activism, I leave you with the final words from Massie’s presentation: “We’re in a crisis. Together we can fix it.” 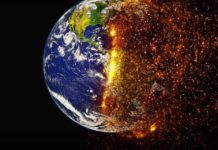 Rosenheim: Climate Change and Mental Health — How can we Help Young People With Their Climate Anxiety?