Grab some eyeliner because My Chemical Romance announced their return on Halloween after a six-year hiatus. They will be playing at the Shrine Auditorium in Los Angeles, California on Dec. 20. The reunion show sold out.

Last week My Chemical Romance’s “The Black Parade” re-entered the Billboard 200 chart. It’s their first entry in over two years according to Alternative Press.

Additionally, Billboard said, “Welcome to the Black Parade” and “I’m Not Okay (I Promise)” reached the LyricFind Global list at Nos. 18 and 22, respectively, proving interest in the band’s reunion worldwide, not just in the U.S.”

“The Black Parade,” which released in October 2006, is one of their biggest successes. As of last year, the album has sold more than 3 million copies making it 3X Platinum according to Alternative Press.

Their hit song “Welcome to the Black Parade” has 128 million views on YouTube. For the video, Gerard Way bleached his hair blonde to appear like a sick patient going through chemotherapy.

According to Louder, “The story surrounds the afterlife of a character named ‘The Patient’ and how, after his death, he is whisked back to the biggest event of his life, in this case “The Black Parade.”

When students heard the G-note in “Welcome to the Black Parade,” only four out of 12 recognized the band.

Along with the California reunion show, they announced tour dates in Australia, New Zealand and Japan for March 2020. Fans hope new tour dates will be added.

The alternative rock band also announced that Thursday will be opening for the reunion show.

“When Thursday booked our 20th Anniversary tour last year, we knew it would likely be our last chance to go out on the road together before like took us our separate ways once again,” said Thursday on an Instagram post. “But one thing that we never could have planned for was the reunion of our closest friends, My Chemical Romance. It was a sincere but welcomed shock when they told us their plans and asked if we wouldn’t join them.”

Since My Chemical Romance’s breakup on March 22, 2013, Way has written comics including Doom Patrol and The Umbrella Academy, the latter also has a Netflix series that came out February 2019. Meanwhile, Frank Iero made music with his band Frank Iero and the Future Violents. Mikey Way and Ray Toro also focused on their individual music interests.

There is so much music to look forward to in the “rawring 20s.” Around the same time as My Chemical Romance’s reunion announcement, Rage Against the Machine and Creeper are two other bands who reunited after a long break. 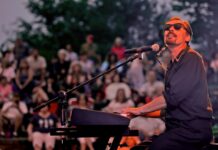