In the words of the great Vince Lombardi, “Winning isn’t everything, it’s the only thing.”

With Rowan extending their undefeated record to 6-0 with a 7-2 wire to wire win over Stevenson University on Wednesday at the Richard Wackar Stadium, it seems like the only thing they can do is win.

The Profs got off to a fast start with sophomore Kristiina Castagnola scoring the first goal off of an assist by sophomore Bridget Guinan with 13:45 left in the first quarter.

From that point on, Rowan completely dominated the game on both sides of the ball.

They held Stevenson scoreless for three and a half quarters with some stellar play by senior goalie Morgan Novak. Her four saves allowed the team to keep its momentum throughout the contest.

Rowan was relentless on the offensive end with a staggering 17 shots which constantly kept Stevenson on its heels. With The Profs being undefeated like they were at this point last season, another flawless season is definitely starting to linger in the teams mind.

“We’re looking to go undefeated this year just like we were last year,” Castagnola said.

At this point of the season, everything is clicking for the Profs and this game was another example of that.

“The team has just been really working together great recently,” Guinan said. “Everyone is at the right place at the right time and it just makes it easier for everyone to play their best.”

It’s easy to lose focus for a team so dominant, but head coach Michelle Andre has been able to keep that in check.

“We don’t lack in practice,” Andre said. “I’ve gotten on them a bit to kind of get us ready for every opponent, because every opponent is going to give it their best.”

The Profs will try to stay undefeated and go 7-0 as they will host Alvernia University next Wednesday at 7 p.m. in Richard Wackar Stadium. 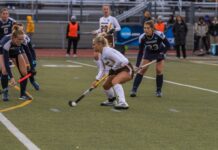 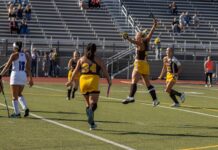