Hosted by ABC on Thursday night, the third Democratic primary debate consisted of the 10 qualifying Democratic candidates on the same stage together for the first time.

One major topic touched on in the debate was education. While mainly K-12 schools were the focus in the education category, both Elizabeth Warren and Bernie Sanders stated their plans to make college tuition free, and to cancel a large portion if not all of America’s student loan debt.

Not everyone, or even every college student agrees with the idea of free college and full student loan debt cancellation for all though. Junior, biological science major Allison Lastra believes that a total change of the way college operates from a financial perspective could be dangerous.

“I think they would have more success with removing the excessive student debt, leaving people with much more manageable [debt], and capping tuitions at a reasonable spot so the whole system doesn’t collapse in on itself due to such an abrupt financial change,” said Lastra.

While the debate was primarily an informative showcase of what candidates have to offer, there were some conflicts that arose. Frontrunner Joe Biden was on the receiving end of some infrequent blows, mainly coming from Julian Castro, who was the first to comment on a potential downside of Biden: the consequences his old age may have on his mental acuity.

Castro asked Biden, “Are you forgetting what you said just two minutes ago?” This jab at Biden’s old age, came after Castro falsely accused Biden of saying that people “would have to buy in” to his healthcare plan.

Many people thought of Castro’s question as an unwarranted attack on Biden, including Freshman jazz studies major Skyler Kern. He thought that Biden’s age should not be a factor in his ability to run the country, as the age gap between Biden and current President Donald Trump is only three years.

“I think it was a low blow… people are confident in a [73 year old] celebrity businessman as president,” said Kern. “A seasoned governor and former vice president should be fine.” 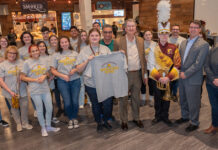