On Saturday, people from all over swarmed to a Rowan-owned fossil park behind a Lowe’s in Mantua Township.

That park is the Jean and Ric Edelman Fossil Park, a paleontological site not only unique to New Jersey, but around the world. Saturday’s event was a community dig day, which allowed hundreds of people to spend time looking for fossils.

The park was originally a mine for green sand, which was used as a material for treating water. In 2011, the company mining there started to go bankrupt. Dr. Kenneth Lacovara, the founding Dean of the School of Earth and Environment and director of the fossil park, and Michelle Bruner, the Economic Development Coordinator for Mantua Township, wanted to do something about it.

“We realized then that if we were going to save [the site], we needed to open it up to the public and let the community organize a grassroots effort around it,” Lacovara said.

Thus followed the first Community Dig Day, which was a shot-in-the-dark effort with no budget, with a sign put out on the side of the road and a couple emails sent.

Since then, community dig days have grown and become more organized. This year, 2,000 tickets for the event sold out in 14 minutes.

On the paleontological level, the site gives the best look at the “heyday of the dinosaurs,” around 65 million years ago, east of the Mississippi River.

Because New Jersey was submerged under almost 100 feet of water at that time, most of the fossils found at the site are that of marine life, including molds of the inside of clams and petrified corals and sea sponges.

Everyone at the fossil park, from adults to little kids, enjoyed bringing out their inner scientist and sifting through the mud to find their own fossils to bring home with them.

Leilani Simmons, 6, was really excited to go to the fossil park “because [she] likes to get dirty and [she] likes to see fossils.” She aspires to be a scientist and an astronaut when she grows up.

Though community dig days are open to everyone, Lacovara encourages Rowan students specifically to visit the park at least once before they graduate.

“I think it’s a lot of fun to be out here getting muddy on a Saturday morning… and enjoy what we have to offer here at Rowan,” Heil said.

As for the future, a museum is to be opened in 2022 on the hill above the fossil park. It will house three exhibit halls, a theatre, space for events, a research lab and a visitors’ fossil lab.

“It will literally become an international tourist destination,” Lacovara said. “Even now, we have people who come to Dig Day from Britain, and people drive all night from Georgia and Michigan. There’s nothing like this on planet Earth.” 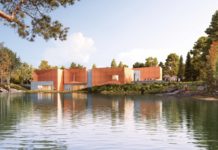 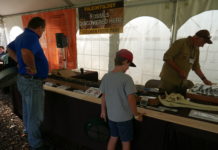