Julian Assange, founder of WikiLeaks, had his asylum revoked by the Ecuadorian government last Thursday in London. He is now facing possible jail time and extradition to the US due to his leak of diplomatic cables in 2011 and the Democratic National Committee email hack in 2016. His expulsion from Ecuador’s embassy marks a turning point for Assange as his crusade of holding governments accountable for their actions may have hit a snag as a result of his arrest. Many in the world of journalism see his arrest as bad precedent for whistle-blowers to come forward or for journalists to do their jobs effectively, but what many in the news business fail to comprehend is that Julian Assange is not a journalist.

Assange has not supported any initiatives to safeguard the liberal democracy pillar of press freedom. He often supports initiatives that benefit him and his website, and contradicts himself when he addresses his critics. Although he “supports” governments to be held accountable, he nonetheless aimed to undermine the 2016 election with help from our adversary, Russia.

If Assange wanted to “safeguard” freedom and democracy from the likes of Hillary Clinton, his first choice of undermining such a “tyrant” shouldn’t have been Putin, who we all know likes to kill critics of his regime and imprison journalists who investigate him. Assange has acknowledged his disdain for Clinton for a number of years in interviews, but his repeated denial of any coordination with Russia during the 2016 election is, at best, laughable.

The US Intelligence community, as well as the Special Counsel of Robert Mueller, all concluded that Russia hacked the DNC’s email server and that the emails themselves were published on WikiLeaks to influence the electorate as a whole. If Assange denied such involvement with a foreign agent, then he sure benefited from Clinton’s embarrassment and loss in the 2016 election.

Further, WikiLeaks itself isn’t the best place for journalists to obtain credible sources. While the notion sounds great on paper, the site itself is filled to the brim with unconfirmed data and unverified documents from any of the leading democracies in the Western world. As a journalist myself, I don’t see Assange as the pinnacle of journalistic integrity. Quite frankly, he’s the opposite. He sows chaos throughout the world and sees joy in the mess he’s created.

What separates him from whistle-blowers like Edward Snowden and Daniel Ellsberg is that both Snowden and Ellsberg saw the deterioration of America’s values. For Snowden, he told the world that the US was spying on both its citizens and its allies, and for Ellsberg, he told the country that the US executive branch lied to both Congress and its citizens about our involvement in Vietnam. Their duty to uphold truth for the sake of their lives proves that not only are they patriots, but heroes who should be honored as such.

Whistle-blowers deserve to be protected under the First Amendment. They are crucial to hold the powerful accountable for their actions and must be safeguarded by any means necessary. However, what makes Assange, and even Chelsea Manning (who herself aided in Assange’s campaign of chaos) different is that they neither gave most of their information to the press for verification nor comprehended the impact they would have on the lives of American soldiers whose names are in those cables and leaks.

I understand that the Espionage Act of 1917 gives a blank check of punishment to whistle-blowers who try to come to the press, but in order for the press to be taken seriously, we need to draw a line between the public’s right to know and sowing chaos. We need to understand that Julian Assange is morally bankrupt in his attempt to be taken seriously and deserves to not only be labeled as a hostile foreign agent, but a traitor to press freedom.

Democracy will die in the darkness if we choose to accept this demon of chaos as an equal in the press. Assange’s low moral character and his malicious intent all but eliminates him as a positive role model for journalists to follow. Journalists around the world have a duty to realize this idea. The sooner we do, the better. 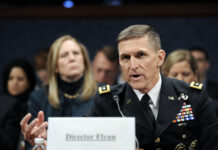 Grilli: The leaks giveth, and the leaks taketh away