LaScala’s Fire, the newest place to eat on Rowan University’s main strip, made an enjoyable impression, but not enough to make me want to come back.

Unfortunately, for being a restaurant located on a college campus, it didn’t actually feel like it was for college students. The prices were a little more than the usual students’ night out and the atmosphere was more upscale than the rest of Rowan Boulevard.

The tables were almost all filled when we showed up around 8:30 p.m. that Friday for the Italian restaurant’s opening weekend. Our group of five scooted awkwardly into a booth long enough for a group of ten to squeeze in before the waitress came over and asked if we had dined there previously. She told us about the large portions and that the food comes out when it’s ready instead of all at once. After bringing us chilled glasses for our wine, she took our appetizer orders.

The dining area was wide and open. All I could see were white tables, white floors and white walls. It all felt chic and modern, simple and clean. Besides the one or two black and white photos on the wall, strange minimalist light fixtures stood out the most in the large open room. They were three-dimensional black frames around light bulbs. This new modern design definitely clashed with the 80s hits playing on the speakers.

There were plenty of people there from outside of Rowan, like older couples and families eating next to tables filled with students, bringing together both the Rowan and Glassboro communities.

For appetizers, we ordered the ricotta board and fire wings (both $12). The cheese board came out at the same time we ordered our dinner. Three of us got the buffalo chicken cutlet pizza ($14) to share, my friend got baked lasagna ($16) and the brussel sprouts appetizer ($12, which set off a ‘which vegetables are best’ argument after the waitress left), and the last person decided on the chicken Italiano panini ($14).

Ricotta cheese, honey and wood-fired piadina bread made up the ricotta board. The warm seasoned bread tasted strange with the cold cheese and honey. It combined a lot of textures and temperatures that didn’t mix as nicely as I would have liked. My friend suggested it might be better with a different kind of bread, but that was the part I liked best.

The pizza, which consisted of chicken cutlets, buffalo sauce, mozzarella and blue cheese, came out first for the entrees and was a suitable size to split between three people, since we already had appetizers. If we hadn’t, it might have been better for one or two people since it was a personal-size pizza. The panini, which had grilled chicken, roasted red peppers, broccoli rabe and provolone cheese on it, came out next and it was pretty hefty. The baked lasagna, made of meat sauce, ricotta and mozzarella cheese and their “Famous Tomato Sauce,” and brussel sprouts came to the table last and it definitely had a strong smell, alluring me from the other end of the table.

At the point, everyone was finishing up and complaining about being full. Regardless, we pushed on and ordered two desserts: limoncello cake and zeppole (both $8). The former was delicious, drizzled with raspberry sauce and gone in under a minute between my friend and I. The latter, six deep-fried dough balls with cannoli filling in the middle and on top, was almost as good as the lemon cake, but eaten less quickly.

Overall, I enjoyed my dinner and nearly all of my friends did as well (the one that ordered a panini wasn’t wowed), but I don’t think I would drop that chunk of change again for a while. For the primary population of Rowan, I would say go once to try it, but it’s not a place to go every week.

Price Range: $9-$24 if only getting an appetizer or entree 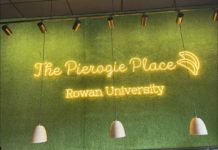 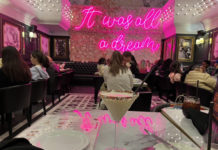 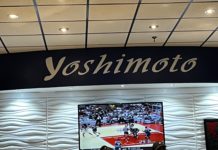 Bennett: Battle of the Restaurants — “Yoshimoto” and “Samurai”