Michelle Macauley had this dream set in her mind since freshman year.

On Monday, she made it a reality.

Macauley shattered records. Not only personal or program, but conference records.

“Prior to me jumping, the girl in front of me missed what she needed,” Macauley said. “I knew I had first place, so I was less tense like everyone was saying I was all meet.”

The day didn’t end there for the Profs, though. In fact, it was just getting started.

Senior Aspen McMillan took first place in the 60 meters and not only broke a conference record with a time of 8.77 (record was 8.85), but set herself atop all of Division III in the event.

Sophomore Olivia Scattergood, who had already broken a school record in the weight throw, went ahead and broke it again to go along nicely with her first place finish of 46′ 11″ (14.32 m).

Now, the record has a bit more reach to it for whoever might compete for it next if it’s not herself again.

“It feels good to put some distance on reaching that record and kind of secure it as mine,” Scattergood said. “…We’ve been working on the rotations. From two to three and back to two.”

Her decision to stick with two would ultimately result in a punched ticket to Nationals.

Although the team came up short, 13 points behind The College of New Jersey’s (TCNJ) 244, head coach Derick Adamson would stand by his decisions made on Monday.

“It felt right,” he said. “And you stick with what feels right. You have to have that accountability.”

A disqualification in the 60 meter hurdles paired with team discrepancies in some events, as indicated by Adamson, would contribute to the team’s results.

Even so, the team still performed at a high level. The 4×200 meter relay took first and junior Aaniyah Robinson finished top in the 60 meter dash in 7.86, a season best.

Sophomores Hannah Vendetta and Angel Rowe finished first in the mile and triple jump, both setting season bests. Vendetta claimed second in the 800 meters with a season best time of 2:19.41.

Myiah Sturdivant took first in the 400 meters and senior Claire Incantalupo finished top in the 500 meters.

The next outing for the Profs will be at the Armory College Last Chance Meet on Friday at 3 p.m. at Armory Track, New York City. 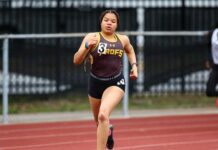 Women’s track aims to repeat as NJAC champions this weekend 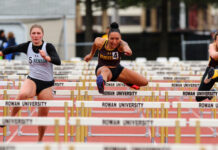 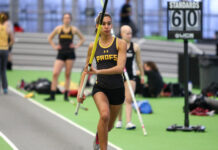