Spring doesn’t officially begin until March 20 (sorry for the reminder) but, by the laws of sports, it starts this weekend as Rowan tees off its baseball season.

It’s like when Santa Claus closes out the Thanksgiving Day Parade and folks say it’s the beginning of Christmas even though it’s a month away.

The Profs play their first game on Sunday, Feb. 24 at Stevens Institute of Technology to (unofficially) officially ring in the spring.

So here is everything you need to know going into the new season.

The Brown and Gold’s 2018 season was a successful one until it wasn’t. They had an impressive 35-11 record, were 12-6 in the New Jersey Athletic Conference (NJAC), won the conference title and were the top seed going into the NCAA Mid-Atlantic Regional Tournament where they lost in the semifinal round.

With such an impressive year, the bar is set high for head coach Mike Dickson’s squad coming into the 2019 season. They’re ranked first in the NJAC according to preseason polls, ranked sixth on D3baseball.com and slated 10th in the American Baseball Coaches Association Preseason Polls.

Most of the team is returning this season, but the losses of Shawn Leydon and Monny Strickland won’t go unnoticed.

As a senior team captain last year, Strickland started every game, slashed .314/.348/.435, led the team in RBI’s, was second in doubles and third in slugging with 18 multi-hit games. On top of that, he was second in RBI’s in the NJAC, forth in doubles and seventh in both home runs and total bases.

On the mound, the Profs boast a deep rotation of Danny Serreino, Andrew DiPiazza, Drew Ryback and Justin Smith with Jeremy Dyzenhaus, Dan Corvo and Shane Kubrak platooning in the fifth spot.

The bullpen is also deepening this year to stave off blown leads late in games, as the Profs had happen six times last season. Andrew Cartier moves to the pen as a late innings reliever and Corvo will be a reliever in conference games as Victor Lebron and Zach Listro will also be used.

The team is also very deep at catcher and third base with three man platoons at each. Behind the plate, Steven Hewa, Zach Leach and Jared Marks will share time. Nick Schooley, Victor Cruz and Bauer Fichter will see time at the hot corner.

As for the rest of the infield, Anthony Harrold will be at first base, Alex Kokos at second and Dillon Mendel at shortstop, who will all be looking to back up All-Mid-Atlantic Region second team honors.

Only one outfielder returns, Dan Shane, who is also used as a weapon on the base paths.

Two transfers were brought in to pad the outfield: Eric Schorr from Rowan College at Gloucester County and Matt Woods from Division I St. John’s Univerity. Look for them to lock down the outfield and liven the batting order.

Another transfer, Mitch Walker, will step in as the designated hitter. He hit a wildly impressive .435 with 78 RBI and 74 runs scored at Cumberland County Community College. His team reached the National Junior College Athletics Association Division III World Series and was named first team All-American. His experience and bat will surely help the Profs.

Now, armed with this knowledge, catch the Profs in their home opener
Tuesday, March 26 against Haverford College at 3:30 p.m. 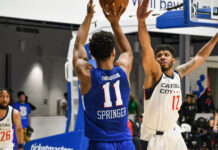 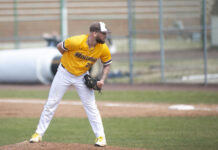 Baseball confident as ever despite early NJAC Tournament upset 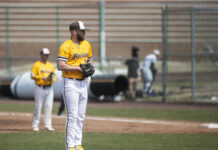