It’s the most wonderful time of the year. The weather’s getting frightful outside and that can only mean one thing:

Rowan women’s basketball is back for another season and have their expectations set high.

The Profs finished with a 16-10 overall record and a 12-6 marking in the New Jersey Athletic Conference (NJAC) last year. They were the fourth seed in the NJAC Championship Tournament and made it to the semifinals before falling to eventual champions Montclair State.

A big question facing Rowan this season is how they will replace graduated stars. Three starters have moved on, including last season’s top scorer Alex Raring. Now in her 19th season under the helm, head coach Gabrielle Lisella states that the depth of this year’s squad will be a key factor in the development of the team as the season goes on.

“Obviously we lost some key players, but we had a lot of players gain a lot of experience,” Lisella said. “The way that we play, young players get a lot of opportunities early in their career without having the pressure of having to carry the team on their shoulders. So, when you play as deep as we do, they get experiences to prepare them to step into those shoes as we move forward.”

Senior guard Olivia Rulon returns after having the most productive season of her career in which she led the team in three-pointers, more than doubled her minutes played compared to the 2016-2017 season and recorded 39 steals, third-best on the team.

Juniors Samantha Tello and Kailyn Sytsma are back as well. Tello moved the ball well last year, jumping from 12 assists to 40 from her freshman year. Sytsma created a presence down low, ranking 12th in the NJAC in blocks and almost doubled her defensive rebounding numbers from her freshman year by accumulating 104 last year.

Juniors Dominique Peters and Alexis Kriley aim to bring their previous underclassmen experiences onto the court and set examples for some of the new faces on the team.

Peters was one of the team’s breakout performers last year in her sophomore season, putting up 13.7 points and 4.7 rebounds a game. But that’s not enough for Peters, who says she’s worked on bettering herself mentally and also on the court.

“I just think I’m going to go 100 percent the whole time,” Peters said. “Sometimes last year I’d allow myself to take breaks, but I’m focusing on finishing better and I worked on my shot.”

Kriley, on the other hand, had her season cut short due to an injury that forced her to play just four games in which she started three. She put in work over the summer to reintegrate herself back into the offense.

“I worked everyday over the summer, but there’s only so much you can do to get better alone,” Kriley said. “Obviously you can get better skills-wise, you can get faster, stronger; but that can only do so much in terms of the team.”

She further stated on how working with her teammates in practice.

“It was kind of tough [coming back], but this team’s easy to work with.”

The Brown and Gold welcome five new faces to the program, all of which Lisella believes can be the puzzle pieces to complete the system she has created.

“I think that recruiting went very well,” Lisella said. “I think we have players that fit into our system very well. They certainly have seemed to make the adjustment to the next level. They’ve caught onto things.”

Jazlyn Duverglas scored 1,000 points at Cedar Creek High School, as did Grace Marshall at Haddon Township High School. Kennedy Brown found to Glassboro after graduating from The Tatnall School (Delaware). Ayanna Johnson and Jessica Beck round up the freshman class after graduating from The Pennington School and Gloucester County Institute of Technology, respectfully.

A challenge for Rowan will be how they maintain their focus and keeping a certain tone set during the year with the mix of players they have.

“We focus on us, and so maintaining the tone we’ve set thus far [is important],” Lisella said. “Here’s an example of where our team’s heads are right now. They’ve come in and they’ve done everything we’ve asked them to do and they’ve come in and competed everyday and brought effort everyday.”

But not everything will always be rainbows and butterflies. There will most definitely be days where things aren’t at the level they should be competition-wise. Fortunately for this group, accountability and picking up the pace when needed proves to be nothing short of motivation.

“There was a day last week and you’re in the doldrums of preseason, not ready to play a game yet, so how do you maintain your focus?” Lisella said. “So we came out in the second half of one of our practices and they just weren’t bringing it like I expect. So I mentioned it and I said ‘This is the first time all season I’ve had to talk to you about focus and effort.’ And, a couple of days later I’m talking to our leadership group and they said they were so disappointed in themselves that I had to say that to them. When a team is holding themselves accountable like that, I’ve got to believe only great things can happen.”

All in all, Lisella and her staff feel like this is a special group that has been created and has her players believing they will be in the running for a conference title.

“I’ve done this a long time and what keeps you going is watching the excitement with each season that grows and develops,” Lisella said. “When you have a group like what we feel we’ve put together and where their heads are at right now, how can you not be excited for them if not for yourself?”

“I think we can dominate the NJAC,” Kriley said. “I really think there’s a lot of teams that have lost key players and we only have nothing but talent coming in and people improving. I really think we can be a powerhouse [in the NJAC].” 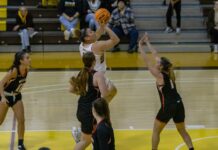 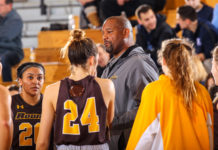