With the battle for first place in the New Jersey Athletic Conference (NJAC) heating up, the highly-anticipated matchup between Rowan and The College of New Jersey (TCNJ) is almost here.

Both teams have established themselves as strong contenders in the NJAC in recent past. The Profs took claimed the first place spot in the conference in 2015, while the Lions took it in 2016 and 2017. As it currently stands, Rowan is 12-1-2 with a 6-2 record in the NJAC and 20 points while TCNJ is 10-1-1 with a 6-0-1 record in the conference and 19 points. A Profs win would secure the conference. If they tie, Rowan would have to hope the Lions tie their last game as well against New Jersey City University on Thursday. If TCNJ wins Wednesday night, they would secure the conference too, obviously.

“It’s one of those games that you don’t have to motivate your kids to play,” head coach Scott Leacott said.

Each side has shown nothing but consistency this season, as TCNJ have brought their defensive prowess into every contest, only allowing four goals all season. Rowan has been doing well to gain momentum towards the big game, coming in on a three-game winning streak and consistently adding new names to the scoresheet. Their most recent win was their 6-0 triumph over Ramapo, where Rowan had five different players score.

Despite the level of intensity this game holds, Leacott doesn’t want anything to be different than past and future contests.

“We’re not going to change anything,” Leacott said. “It’s a matter of us executing. If we execute what we tried to instill in them all year, we should be able to get some very good looks against them.”

Rowan’s defense will also be looking to have a pivotal role in the contest. This season Rowan has been able to keep 11 clean sheets in 16 games and look to shutdown a Lions offense that is sixth in the NJAC in goals per-game.

“I don’t have a doubt that we can get a win,” said senior defender Ali Hicks. “I just think that we have to come out to play and make the right decisions from minute one to the ending 90. And it’ll take a total team effort, for 90 minutes… I know it’s going to be a rough match and you can’t let down for a second. That comes with experience. With that, I’ve played in big games. I know what to expect and I want to help my team, however, I can.”

The patience and consistency of the Profs’ offense will be put to the test as TCNJ is notorious for the high-pressure play style.

“They do a really good job of taking you out of your comfort zone, we have to be able to not get out of it so quick,” Leacott said. “I think we have to be patient, they force you into getting rid of the ball early and not doing the things that you want to do. I think if we stick to what we’ve been doing all year, we should be fine.”

UPDATE: Rowan fell 2-1 to the Lions, losing the chance to capture the first seed in the NJAC Championship Playoffs that will begin next week. TCNJ’s goal at the 87 minute mark was the difference in this one. 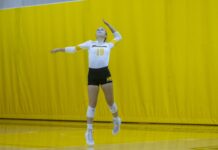 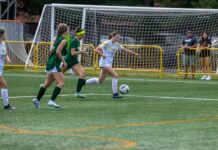