Confetti sprinkled down from the ceiling and giraffes flooded the Esbjornson Gymnasium.

At least that’s what Rowan women’s volleyball coach Deana Jespersen and the father of senior Erin Keegan wanted to happen on a historic Saturday last week.

“I had contacted her parents a while ago just to let them know that I thought that it was happening so they did cake and stuff,” Jespersen said. “Her father was extremely funny and said he had wanted confetti to fall from the ceiling. I wrote back to him and said ‘She likes giraffes, so while I’m at it why don’t I just get a giraffe to show up like a circus?'” So everyday since then he sent me pictures of giraffes in my emails so I ended up buying her a stuffed giraffe that has the sign around its neck.”

Keegan unknowingly notched her 1,000th career dig during Rowan’s match against Eastern University this past weekend. Some flawed quick math led Keegan to the conclusion that she wasn’t as close as she thought.

Misjudged or not, it still came as a shock to Keegan who thought the scene was for someone else.

“I didn’t believe it was for me,” Keegan said. “I saw it and was looking around the corner and was like ‘Emma?’ I didn’t know who it was for. I was shocked, didn’t even know how to react. It was amazing. I didn’t believe I could do it but once I heard about it, I was like ‘Wow, I did that.'”

The team had big plans for a celebration but found themselves without the slightest amount of resources to congratulate the 5’10” outside hitter, not even a timeout or some poster board.

“You can’t stop the game, I didn’t have any timeouts left,” Jespersen joked. “We really didn’t want her to know. So, the idea was to call a timeout so she would turn and see it but instead she turned and was really confused.”

“We didn’t really know what to do,” fellow senior Jamie Shirtz said. “I was going to probably hug her but I wasn’t even on the court with her so I couldn’t do that. I could’ve tackled her but you can’t do that in the middle of the set so we limited ourselves to just paper.”

Keegan is having her best defensive season to-date as she’s on pace for 470 digs this season. That’s 93 more than she had last year and 388 more than she had her freshman year, to put more emphasis on the milestone into perspective.

Senior defensive specialist Kristin Akin appreciated seeing the record being etched into the books firsthand, especially from a long-time friend.

“It’s definitely really cool,” Akin said. “I actually grew up playing with her. I’ve known her since my sophomore year of high school. Seeing someone hit that, I haven’t seen it personally, so I’m really happy for her.”

The achievement stands as a testament to the first recruiting class of Jespersen’s career at Rowan and for those that have followed and eventually will find themselves in Glassboro playing in the Esby Gym.

“It’s so cool,” Jespersen said. “I love that class. I mean, again, I remember the day she committed. I remember her jumping off the curb looking at me going ‘So how do I commit? Like, what happens now?’ And her mom going ‘Um, I think we need to talk to your father with financing.’ How excited she was about coming to play here was super cool. It means a lot to me because they stuck with me. It was really important for me for this season, their senior season, to be full of good memories and that they could see that they will be the class for me that honestly started everything for me.”

The class of 2019 recruiting trio of Keegan, Shirtz and Akin have truly defined the gold standard for brown and gold volleyball. 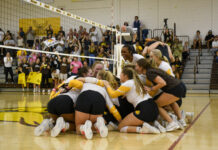 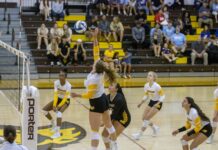