Hassan described his perspective of the event,

“It was a regular Monday, I’m in class, and I had to leave to get my glasses. Giovana asked me to drop her off at the student center, I see two cop cars at the T-Mobile so I’m not worried.” he then leaves the shopping center, “I see them pass the car two cars behind me. He stopped the car, backed up and pulled the gun.”

According to the GPD Facebook page “Borough and Rowan Officials will form a committe that will meet on a regular basis to communicate and dialogue to form a bridge to move forward. This committee will include Rowan, Borough and SGA officials.” 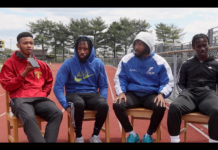