Stalking and drug-related crimes were up, and liquor violations and burglaries were down on Rowan University’s main campus in 2017, according to an annual report released by Public Safety.

The Annual Security and Fire Safety Report, also known as the Clery Report, covers 2015 to 2017 and is required by federal law. All universities and colleges that receive financial aid must publish crime statistics, as a result of the Clery Act, which is named after a Lehigh University student who was murdered in 1986.

Reports of stalking, defined as “conduct directed at a specific person that would cause a reasonable person to feel fear,”  increased by 72 percent since the previous year. Reed Layton, senior director of Public Safety, commented that the increase is a result of more students on campus and more forms of communication like emails and texts between students.

“We take stalking and domestic violence very seriously,” Layton said. “Over the last three to four years, [cyber-stalking] has been out of control. Before, you didn’t have that, and now it’s way up.”

“An increase in the past two or three years is marijuana possessions,” Layton said. “If an officer goes into a room and seems some paraphernalia, some clips, and stuff and a little bit of marijuana he might not do an arrest. He might just do a report, seize the evidence and do it as a referral to Student Life.”

A referral means that a violation and disciplinary action is handled by the university, as opposed to taken into custody and arrested.

There was also a sharp decline in burglaries, which decreased from 44 incidents to 12 between 2016 and 2017.

“Last year we had a string of burglaries during the holidays…we did apprehend [the suspects] and the cases were all closed,” Layton said in reference to the decreased number of burglaries.

“Also, with security cameras, the campus is basically all covered,” he added. “It’s tremendous what the results are with the cameras. We solve a lot of things because of the cameras.”

Overall, there was a 10 percent decrease in reported crime. Rowan University was recently ranked 58 on a list of the top 100 safest college campuses in the United States, according to the National Council for Home Safety and Security. 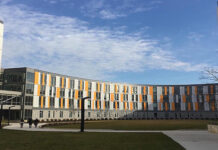