On Thursday, a once-vacant lot of land on East High St. burst into bloom with the assistance of the Department of Geography, Planning and Sustainability (GPS). The pop-up night garden, the most recent in GPS’s series of pop-up events, explored urban land-use while also inviting students and members of the Glassboro community to interact with their community space.

According to Jennifer Kitson, assistant professor within GPS, the garden was intended to embody sustainable and collaborative practices of public areas. The project saw partnership with Rowan’s School of Earth and Environment, College of Performing Arts, Creative Glassboro, Nexus Properties, the Glassboro community, and the Mosaic Family Success Center.

“The public and the university community are invited to see how these students apply the principles of creative placemaking in an unused space in downtown Glassboro,” Kitson wrote in an email. “Through twinning arts, culture, and environmental goals, this temporary event is intended to contribute to building long-term social capital and civic engagement.”

Mahbubur Meenar, an assistant professor of Community and Environmental Planning within the GPS Department, was involved in the organizational stages of this event and was responsible for making partnerships with Creative Glassboro, Nexus Apartments and other community organizations. He also saw this pop-up event as an ideal chance to have his own students learn about qualitative mapping from a practical scenario.

“Today, [students from] my class, geovisualization, are collecting data on how people are moving from one station to another based on the activity and they are taking times for this data,” Meenar said. “Then they’re going to analyze this on a heat map for how people are behaving and responding to different types of activities.”

Senior Joseph Foti, a disaster preparedness and emergency management major taking Meenar’s class, believes that the skills learned through this project will have useful applications in his future career.

“There’s a lot of mapping that goes into [disaster preparedness],” Foti said. “Geovisualization is about how to present maps and show them off. So even though I don’t need the class to complete my degree, it seems like a very useful skill to work towards.”

Present at the event were representatives from the Rowan University Art Gallery, Geography Club and the Creative Glassboro Commission. According to Meenar, this cooperative event has been about a year in the making. 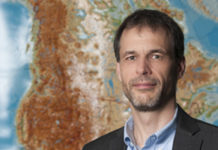 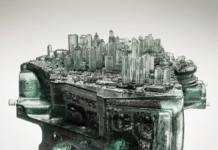 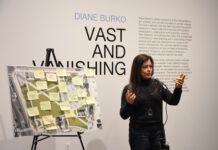