Brought together by an appreciation of words, the Denise Gess Literary Awards showcased the talents of Rowan University’s aspiring writers, while creating a memorandum for a beloved professor.

The event was hosted in the 301 East High Street Rowan Art Gallery on April 2.

Gess was a creative writing professor at Rowan from 2004 until her tragic, untimely death from lung cancer in 2009. The award ceremony was named after her to commemorate the impact she had on her students and coworkers.

“She was so much fun and the students absolutely adored her,” said Jennifer Courtney, the chair of the Writing Arts Department and professor, who worked closely with Gess and even shared an office with her for two years.

Gess’ brother described her as being always creative and always wanting to do great things.

“She would say, ‘I write because I have to write!’” he said.

They would talk on the phone for hours and she wore her heart on her sleeve.

If she could have been at the ceremony she would have said, “I’m so excited I could rip my arm off!” Piccoli explained.

The awards were broken down into three categories, The Edward Czwartacki Award for Fiction, the Rowan University Award for Poetry and The Pat B. Tweedie Award for Creative Nonfiction. Those who won first place received $200, second place won $100 and third place got $50. The prize money was recently doubled for this year’s competition.

Three honorable mentions were given out in the poetry section, going to Laura Kincaid, Kylee Bagley and Tara Lonsdorf. Third went to Vasiliki Dinoulis, second went to Daniel McGilloway and senior student Morgan Douglas closed out the poetry category on top, receiving first place for her collection called, “Red.”

“We look for craft and technical just skill and competence, but beyond that we look for imagination, ingenuity, something that’s a little risky, and also something that makes us feel,” said Lisa Jahn-Clough, coordinator and judge of the event.

Winners got to share a two to three minute excerpt from their writing. The works ranged from humorous, to chilling, to mysterious. Some were really open and honest which is exactly how Joe Piccoli describes his sister, “She wasn’t perfect, but she was honest, always honest.”

“I always write with a little piece of me. I feel more attached and there’s more passion,” Phillips said.

The support for the students and memories shared about Gess filled the room. Each presenter had something kind to say about the late professor and shared stories of her unforgettable impact.

“She was a marvelous once in a lifetime friend,” Courtney said. 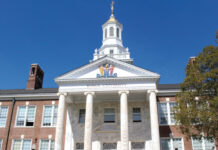