Ah, March Madness. A wonderful time of year where ladies and gentlemen turn their eyes to the world of college basketball.

Brackets are painfully filled out by many with hopes that they will become the Nostradamus of sports by predicting the perfect tournament.

But this year’s tournament has lived up to its name.

Never before have we seen so many improbable upsets in one tournament, shattering virtually every single bracket that was made.

Of all the upsets that happened across the first two rounds, no upset was bigger than #16 UMBC knocking off #1 Virginia, who was the overall favorite to win the National Championship at 18.5 percent.

Only 3.4 percent of the over 17 million brackets took UMBC over Virginia in the first game and the result wasn’t even close, as the Retrievers won 74-54 in what fans are calling the biggest upset in college basketball history.

UMBC’s underdog story came to an end in the Round of 32 with a loss to Kansas State, 50-43. Despite the loss, the Retrievers taught us that the old cliche in sports of “It ain’t over ’til it’s over” still holds true today.

Along with that shocker, other top seeds fell in the first two rounds. #4 Arizona was routed by #13 Buffalo. #11 Loyola-Chicago knocked off #6 Miami and then #3 Tennessee.

Don’t let the seed numbers confuse you. What transpired in the first two rounds was unimaginable. When will we ever see this many upsets across the first weekend ever again?

As we enter the Sweet 16, both Loyola-Chicago and Syracuse are the lowest seeds remaining, both #11. Never before have low seeds been so feared either.

Loyola-Chicago is faced against a #7 Nevada team that just upset #2 Cincinnati.

The next team remaining with the highest percentage of selections across all brackets to win it all is Villanova, at 16.3 percent.

‘Nova won the National Championship in 2016 on the famous Kris Jenkins buzzer-beater and feel they have the same type of squad to win it all again.

#2 Duke is another heavy favorite as they enter this weekend facing that underdog Syracuse team. The winner faces the victor of the Kansas-Clemson game, one in which the Jayhawks are favored.

As the season has officially changed to spring and the month of March is starting to come to an end, it is an indication that we are entering the final stretch of March Madness.

Who will be playing for the National Championship in San Antonio on April 2?

That remains to be seen, but the way this tournament has gone, don’t be surprised if Cinderella is standing tall amidst all of the madness. 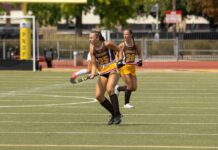