The defending Super Bowl champion Philadelphia Eagles are primed and ready to repeat. The new year in the NFL kicked off with a bang this past week with unexpected trades and free agent signings. Eagles GM and football mastermind Howie Roseman was at it again, turning dirt into gold—this time by trading for Michael Bennett. As if the eagles defensive line was not already formidable this past season, the team went ahead and added two studs in, Bennet and Haloti Ngata.

The Eagles were forced to say goodbye to some fan favorites as the new NFL year began. Brent Celek, the longest tenured athlete in Philly was released which was hard to come to grips with. Celek along with other fan favorites such as Beau Allen and Trey Burton. Although it was sad to see, it had to be done in order for the team to be competitive and go after players that will improve the team.

The Eagles ended this past season as the best team in football, but even after winning the super bowl they added more talent to get even better. There is nothing better as a fan than to see your favorite team be aggressive in trades and free agency. Taking a step back and looking at the rest of the NFC East, eagles fans have even more to be happy about. The Dallas Cowboys have seem to forgotten that free agency started due to the fact that they have made no moves to improve. The Redskins made one of the biggest moves in the off-season by trading their young to get an aged quarterback—which is a win for the Eagles and their promising future.

The Eagles have made such great moves already this off season, but the biggest addition to the team next season is not a new player by any means; its the return of Carson Wentz. Eagles fans have so much to be excited for with a great chance to be competitive again next season thanks to the genius that is Howie Roseman. 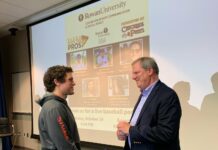 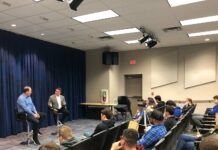 Zach Berman Gives Career Advice During “Pizza With the Pros”